Burning Of Our Bad Karmas And Attaining Salvation 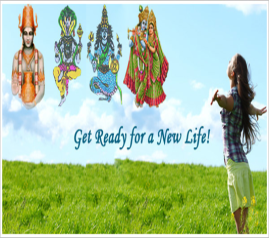 BURNING OF OUR BAD KARMAS AND ATTAINING SALVATION

Every one of us would be having the doubt in our mind. Whether I am eligible for attaining Salvation? When my bad karmas would be burnt? This question usually arises in our mind, since every day, we are doing either small or big mistakes in our life, whether knowingly or unknowingly! But the impact of that will be very high, and due to that, we have to suffer from unknown diseases or from mental uneasiness.

During this present Kali Yuga, doing only good karmas is very difficult! Since even causing harm to small insects is also accounted as bad karma in our life account by the great god Sri Chitra Gupta Bhagavan. Even if we touches the idol of the god with our dirty hands, that also is accounted as a sin, and due to that, in future, we may have to suffer from several problems in our life. Killing the small insects like ants, spiders and worms also is counted as a sin, and for that, we will be taking births as insects in our subsequent births, and we would be killed by someone.

Similarly, people who eat non vegetarian food would be born in their next births as goats, cows, fish, buffaloes, hens and cocks, and they would be killed by others. This is the chain of actions which is happening as per the Yuga Dharma, and no one can escape from this Yuga Dharma. But at the same time, in this Kali Yuga, just by merely chanting the names of the god, we could attain salvation. In the previous Yugas, people have to do severe penance for several years, in order to attain salvation.

Though burning of our bad Karmas in a single birth is highly impossible, but in some cases, due to the grace of the almighty, if the great saints, wants us to attain salvation, then they would make us to do lot of good deeds in our life, and by that way, they would give salvation to us. The great Madhwa Saint Sri Raghavendra Swamigal, gave salvation to a Rama devotee, who was a lower caste person, by accepting mustard from him, and mixed the same with the Prasad food items, and he asked the person to attend the Moola Rama Puja, and made him to eat the holy Prasad cooked by the staffs of the Madhwa Mutt. After eating the delicious food, the devotee danced with happiness, and attained salvation in that place itself. Similarly, Sri Rama Maharishi, had given salvation to his own mother, during the time of her death, and removed her bad karmas, by gently pressing her body, and the great Advaita Saint, Sri Adisankara, had also given salvation to his mother, at the time of her death. Similarly lot of saints had performed goodness in the life of the devotees, and made them to attain salvation by burning their bad karmas.

Mahavatar Babaji had removed the karmas of his devotees, by causing fire injuries in their body for a few seconds, and immediately he healed their burns. He is such a kind of kind hearted and a divine person! Hence, let us try to avoid doing bad things in our life, and let us always do good deeds in our life, concentrate our entire attention on god, and let us aim to attain salvation after our death.