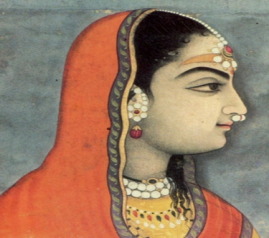 Kumkum, Sandal and Turmeric are considered as sacred products in Hinduism. Most of the Hindu women used to apply Kumkum, Sandal and Turmeric in their body, and by doing that, their face would look very bright and they would feel that goddess Lakshmi would dwell in their homes. The system of using these holy products is practicable since ancient times, and in the Ramayana, it is said, that Ma Sita would apply these holy products in the morning after taking bath, and before doing Puja to the deities.

By applying these holy things on the body, females would get more protection from the society, and even the bad mannered people would give more respect to them. During ancient periods, women would wake up early in the morning, would take bath, and would eagerly apply these holy things on their body, and worship the deities by performing puja to them.

But nowadays due to the fast changing world, and due to lack of time, some women are not applying these sacred things on their body. Some women are not aware of the significance of these holy things. By applying these things, even the divine devas would highly respect the women, and also they would worship them. Hence it is best for all the Hindu women, to apply these sacred things in their body, in order to get all kinds of prosperity in their lives.

Some ladies are ignoring to apply these sacred things, by considering this as an ancient practice. City girls are thinking that this has to be applied only by the village people. But these divine products can be applied in the body of ladies, both for spiritual as well as for scientific purpose also. Sandal and Turmeric would cool the body, and would remove the heat from the body. Sandal and Turmeric can also be applied in case of small wounds. Kumkum is an aspect of Ma Shakti Devi, and also it gives long life for their consorts. Most of the Married women would apply kumkum on their foreheads, in order to identify themselves among others as “MARRIED WOMEN”.

Hence let all the Hindu women apply Sandal, Kumkum and Turmeric on their body, in order to get the grace of the almighty, as well as to get a healthy body.