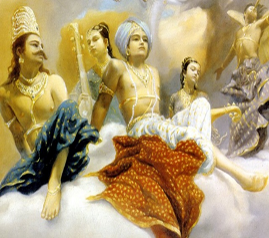 Generally Immortals refers to the people living in the heaven and they are known as Devas or demigods. Those ordinary people who live in this earth are known as mortals, since their life period is already fixed by the god, and at any time, death may occur to them. But strictly speaking the term Immortal refers only to Lord Shiva and his family, Lord Vishnu and his consort Ma Lakshmi. It is believed that Lord Brahma and Ma Saraswati are supposed to be merged with Lord Vishnu after the completion of this Yuga, and the new Brahma during the next Yuga would be Lord Hanuman and his Shakti element, Ma Swarchala Devi would be the next Saraswati.

Even Lord Indra also would have to vacate from his abode after the completion of this Kali Yuga, and the next Indra would be the great Mahabalai, grandson of the pure and pious, the great Bhatka Prahalada.

Lord Parasurama would attain the position of a great Maharishi during the next yuga, and Chiranjivis like Veda Vyasa, Vibhishana and Ashwatama would also get a noble birth during the next yuga, and till the end of this Kali Yuga, they would remain in their existing position, and they would be considered as Immortals. Those who live in the Indra Loka also called as Swarka Loka, and enjoying heavenly pleasures in that world, though they are considered as immortals, but they are also subject to compulsory return to the earth, once their good karmas are exhausted fully in the heaven.

The snake deities living in the lower world, Naga Loka, though they have got a long life, but they are also subject to death. But in case of snake kings like Adisesha and Vasuki, there is no end for them, since they are considered as divine snakes. The everlasting youth Rishi, Markandeya is also believed to be reborn during the next yuga as a powerful rishi. But these powerful sages are being born in this earth in order to maintain Dharma in the world.

But the condition of the ordinary people like us is very pitiable, since we would be subject to lot of continuous births in the world, and we would also be born like insects, birds and animals, based on our karmic deeds.

The only thing which we can do is to keep on worshipping the god by reciting his names and mantras, praising him through his divine songs, and by involving ourselves in full of spiritual and charitable activities.