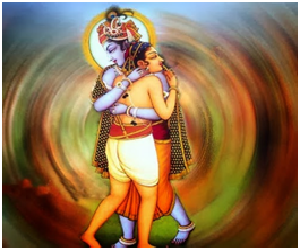 In simple terms, Jivatma refers to ordinary mortals, whereas Paramatma refers to the supreme god. Jivatma can also be referred to as the souls of the living beings in the world. And if a Jivatma realizes the god in his soul, then there is a possibility for him to merge with Paramatma, and it can be made possible only by doing constant meditation on the almighty.

These two terms were well defined in various scriptures such as the Bhagavad Gita, Bhagavatham and in other Holy Puranas. Jivatma can be of birds, insects, animals and humans.

According to Lord Krishna in his Bhagavat Gita, “I am the one who cannot be seen easily even by the great saints and sages. I have been referred to as the Supreme Paramatma, whereas all other types of living beings are classified as Jivatma. For all the Jivatma, there is no end for their soul. Even if their body is destroyed, their soul would never get destroyed, and it would take various forms of body in their subsequent births. In order to unite with Paramatma, the Jivatma has to continuously meditate on me, throughout in his life, and in course of time, due to his selfless devotion, I would grant salvation to him, and I would make him to unite with me.

I am residing in the souls of all the Jivatma’s whether it may be a small insect or otherwise a big elephant. And I am also residing in the souls of all the humans in the earth, and also residing in the souls of all the demi gods in the heaven. Whoever realize me with full of devotion in their mind, I would grant the everlasting bliss, and would make them to merge with me. But that is very difficult, since human minds would easily get diverted and would get tempted to enjoy the worldly things in their life. They would get addicted by enjoying physical comforts and sensual pleasures in their life. If anyone leaves all the comforts and luxuries and surrenders on to my holy feet, similar to my beloved Prahalada and Dhruva, I would grant them a good position in the divine worlds, or I would keep him along with me permanently”.

From the Bhagavat Gita lecture given by Lord Krishna, we can understand that a Jivatma cannot become a Paramatma easily, since it requires lot of patience, devotion and dedication on the almighty. Hence, let us surrender on the lotus feet of Lord Krishna, and let us ask him to grant salvation.