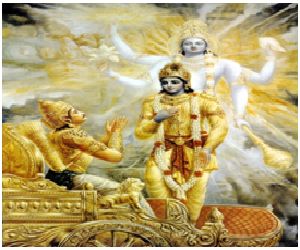 Kama also known as lust is the root cause of the problems in our life, and it would make us to commit lot of bad karmas in our life. Due to this bad habit Kama, even the divine demi gods like Indra and Chandra had lost their powers for some time, and began to suffer like ordinary people. When Arjuna asks Lord Krishna, during the Kurukshetra war, that why the people are committing sins as if they have been forcefully induced by others, Lord Krishna had replied for that, “Kama is the main reason for committing sins. People must have to control their senses in order to stop committing sins in their life”.

Among the various bad habits, lust is considered as the worst bad habit, since it makes us to do lot of sins in our life. During the time of Mughal invasion in India, Mughal soldiers have tried to seduce lot of Holy Hindu women, due to that, thousands of pious ladies were committed suicides. Due to lust, these soldiers were committed the sins, and they were also responsible for the deaths of the chaste, pious and good natured ladies. Due to their sins, definitely these Muslim soldiers would have suffered in their subsequent births, and would be born like transgender or blind people.

But divine AMSHAS like Prahalada and Dhruva though they were kings during their period, they lived only with their consorts, and they didn’t disturbed any women, and considered all the women as the incarnations of Ma Shakti Devi. Due to that, they have become the beloved devotees of Lord Vishnu. Rishi Markandeya is still living in the form of a youth, but so far he didn’t get married. He has been living for several millions of years, but he didn’t get tempted, and never committed any mistakes in his life. His aim is to sincerely worship Lord Shiva and Ma Shakti, and it is believed that he lives in the upper divine world, as a holy rishi.

Similarly Lord Hanuman and Lord Parasurama didn’t think about any women, and they have fully controlled their senses, and they are still meditating in the holy mountain Himalayas by worshipping the great almighty.

In order to overcome lust, and in order to live a pious life, we must have to think about the holy divine avatars like Hanuman, Prahalada and Parasurama, and must live like them.

We have to consider all the women as the divine incarnations of Ma Shakti Devi, and must give respect to them.