In: Divine Matters, Temples
With: 0 Comments 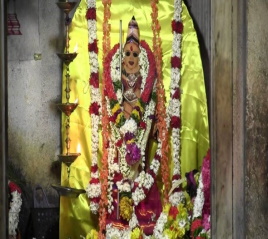 Kannaki Amman is the divine form of the pious and noble woman Kannagi, who was worshipped mainly in Sri Lanka and Kerala. She is considered as the goddess of chastity, rain and fertilization. She is also worshipped by the Sinhalese Buddhists as Pattini Deviyo. There is also a statue of Kannaki at Bharathi Salai, Marina Beach, Triplicane, Chennai – 600005.

Silapathikaram, the ancient work of Ilango Adigal describes the problematic life of Kannaki. It is believed that she would have lived before 2000 plus years ago. She got married with the rich merchant Kovalan. But he has lost all of his wealth due to having an affair with a dancer called Madhavi. In course of time, he realized his mistake and travelled to Madurai to start a new life. While kovalan was selling the anklets of Kannaki for getting money in Madurai, he was misunderstood as the thief of stealing the Pandya queen’s anklet and beheaded by King’s order without any proper inquiries. Kannaki became very angry and proves that her husband was an honest man at the court of the King by breaking her anklets, and tells to the king that the anklet seized from Kovalan is her own anklet. On hearing the words of Kannaki, the Pandya King was shocked and died. Kannaki through her great powers burnt Madurai. Then, she has become a celestial goddess.

Several pandiyan kings were worshipped her as their Ishta devata and got relieved from drought in Madurai.

Kannaki is mainly considered as the rain goddess, and she got the name “Mari Amman“. She is worshipped as Mariamman in Tamil nadu for getting proper rain and for getting relieved from small pox and from several dreaded diseases.

Kannaki is popularly worshipped every year during the Vaikasi month (May–June) in Srilanka.

By worshipping Mata Kannaki, we would get all the prosperity in our life, and will have a blessed life. She will remove the fear from our minds and helps us to live peaceful and a happy life. Though her husband Kovalan had lost all of his riches by having an affair with the dancer madhavi, she didn’t hate him, but still showed her love and affection on him. Since she is considered as the goddess of chastity, it is advisable for the ladies to worship her with pure devotion in mind, in order to live their life without any problems and to live a happy married life. Let us worship the holy, pious and the great goddess “MATA KANNAKI AMMAN” and be blessed.