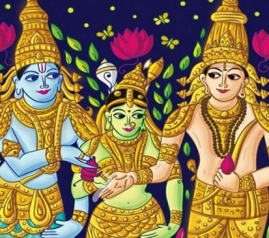 Meenakshi Thirukalyanam, is an annual festival event held at Madurai during the Tamil month of Chithirai. This festival is celebrated in order to sanctify Ma Meenakshi, a form of Ma Shakti Devi, by performing marriage to her along with her consort Lord Sundareswarar, a form of Lord Shiva, and during the celebrations, Lord Alagar, a form of Lord Vishnu, is also honoured at the Kallazhagar temple in Madurai, since he is considered to be the elder brother of Ma Meenakshi.

As per the legend, Meenakshi was appeared in the sacrificial fire in the form of a small baby, when a Yagna was performed by the King Malayathvaja Pandiyan and his wife Kanchanamala, since they didn’t have child for a long period. The royal couple were informed by a divine voice from the sky that the child was an incarnation of Ma Shakti Devi, and Lord Shiva himself would come to marry her at the appropriate time. Meenakshi was trained in all kinds of arts, and she was crowned as the Queen of the Pandya kingdom after the death of her father. Due to her skills, she defeated the kings in the earth, and finally she went to Mount Kailash in order to conquer it. When Meenakshi met Lord Shiva face to face in the battlefield, she fell in love with him and she also got to know that she was an avatar of Ma Shakti.

Lord Shiva promised Ma Meenakshi that he would come to Madurai to marry her. And at the right time, Lord Shiva along with the Devas Bhoothaganas and rishis arrived at Madurai. Lord Shiva married Ma Meenakshi and ruled the Pandya kingdom along with his consort Ma Meenakshi, under the name Sundara Pandyan in a well-versed manner. And during the time of their rule, rain was showered in all the reasons, the crops were grown properly, and the people in Madurai lived a long life, without any problems, since the Madurai City was ruled by the divine couple. Meenakshi Kalyanam is the wedding celebration of Ma Meenakshi and Lord Shiva (Sundareshwarar) in Madurai. On the day of Meenakshi Kalyanam, devotees used to get up early, and they would eagerly visit the Meenakshi temple in Madurai. Ma Meenakshi and Sundareswarar would be worshipped after worshipping Lord Vinayaka. Devotees used to bring fruits, flowers, flower garlands, coconuts and other puja items as an offering to the god. The idols of Meenakashi and Sundareswarar are decorated with beautiful ornaments and garments. On the day of Meenakshi Kalyanam, almost the entire people in Madurai can be found available at Sri Meenakshi Amman Temple. Priests would perform special pujas to Meenakshi Amman by chanting the Divine Mantras in order to glorify the divine mother, Ma Meenakshi. After the completion of the puja, Utsava idols of Lord Sundareshwarar and Ma Meenakshi Amman would be taken out from the temple, in order to make processions on the streets in the Divine Vehicles.

Let us worship Ma Meenakshi and Lord Sundareswarar and let us be blessed.