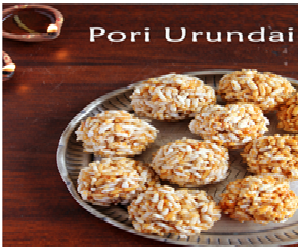 After preparing the Pori Urundai, lamps would be lighted inside and outside of the homes, and puja would be performed to Lord Vinayaka, Shiva, Ma Parvati and Lord Muruga, and during that time, various varieties of offerings such as Appam and Pori urandai would be placed before the deities. After a short time, these Prasad items would be consumed by the puja performers, and mostly small children would love the taste of Pori Urundai. Ancient people would celebrate these festivals grandly, and at the time of Karthigai deepam, they would decorate their homes with lot of lamps, and special Prasad items, like Murukku, Appam and Pori Urundai, would be prepared. People would love to eat the Prasad items by sharing it with their neighbours and also would eagerly talk about the stories related to the birth of Lord Muruga, which occurred in the month of Karthigai. Some people would chant the mantras of the deities, and some would read the holy puranas during this auspicious festival day.

But nowadays, most of the people lose their interest on account of changing scenario and also they don’t have patience in preparing varieties of food items.  In general, most of the time, we are thinking about unwanted things and about our future. Instead of doing like that, we can cheerfully celebrate our Hindu festivals in a grand manner, and by worshipping the deities in a nice manner. Celebration of festivals would please the divine deities, and also by doing that, the severity of our sins would be reduced to some extent, and we can enjoy our each and every moment of life.