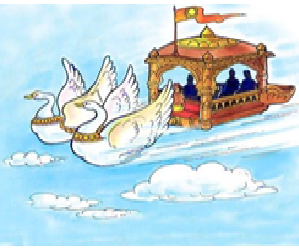 Vimana also called as Pushpaka Vimana is the ancient flying chariots, which contains supreme powers, and the details about it were mentioned in ancient Vedas and in Puranas. Among the Pushpaka Vimanas, Pushpaka Vimana owned by Lord Kubera is very powerful, and it would allow the people in the entire earth to enter into it, since when large number of people enters into the Vimana, it would automatically enlarges its size. This Vimana was gifted to Kubera by Lord Shiva, in appreciation to his bhakti.

During the Treta Yuga, Ravana forcibly took this Vimana from Kubera, and after the death of Ravana, Lord Rama had returned this holy Vimana to Lord Kubera. Apart from this Pushpaka Vimana, lot of Vimanas are owned by the Divine Devas in the heaven. Lord Indra’s Vimana contains attractive beauty, and it would be able to move faster to any divine worlds, and would reach the worlds within a few hours, and it is driven by his wonderful charioteer Mathali. During the Krita Yuga, the great Bhakta Prahalada was also blessed with a divine chariot, and it was gifted to him by Lord Brahma. He used this divine chariot, during his fights with the Devas. The Navagrahas and the demi gods like Vayu, Agni, Varuna and Yama also own divine chariots, and it also contains all the best features. During the Kurukshetra war, the Pandavas were able to won in the battle, due to Lord Krishna, who was the charioteer of Arjuna during the battle. From the life history of the recently lived saints like Sri Seshadri Swamigal, we can know about the greatness of the Vimanas.

Once when Seshadri Swamigal was a small boy, he watched the celestial Gandharvas and the demi gods were riding their chariots in the sky. Due to his super natural powers, he was able to witness such a divine scene in the sky. But we are all ordinary human beings, and we could be able to know about it only by reading our holy texts.