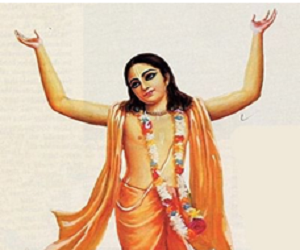 Shri Chaitanya Mahaprabhu was a 15th century saint who was considered as an incarnation of Radhakrishna by his disciples and followers. Chaitanya Mahaprabhu used a different method of worship of Lord Krishna, like singing his songs by the way of dancing and jumping and he used to walk for some distance with full of madness on Lord Krishna. His devotion is highly appreciated by the Krishna devotees and also by the followers of ISKCON movement.

Chaitanya Mahaprabhu was the main person of the “SRI KRISHNA BHAKTI MOVEMENT”, and through his efforts, the essence of devotion on Krishna had spread into masses. He asked his devotees to worship Lord Krishna in a joyful manner.  He composed some divine texts in praise of Lord Krishna.

Chaitanya Mahaprabhu was very popular in North India, and especially in Mathura and Dwaraka cities.

Some of his good golden quotes are as follows:-

Be more humble to those poor and downtrodden people, and help them whenever they are in need of your help.

Realise that Krishna is the Supreme god, and he contains super natural powers.

Krishna is the ocean of divinity and he is the absolute truth.

The human beings are distancing themselves from Lord Krishna due to their ignorance.

In the state of true bhakti, the liberated human souls can be merged with Lord Krishna.

Krishna Bhakti cannot come within a short period, and we can reach him in a step by step manner.

Pure devotion only can make lot of good changes in your life.

Your main goal must be to love Lord Krishna, and to realise him in your soul.

Krishna is ready to take you to his abode, based on your sincerity on him.

In this Kali Yuga, chanting the holy names of Lord Krishna is very best for getting relieved from the miseries and sorrows.

The word Brahman denotes Lord Krishna only, and it is mentioned in our ancient Vedic subjects also.

Do divine service by offering prayers, performing puja, visiting the temples of Krishna, and by chanting his glories.

Don’t forget to think about Lord Krishna even during the time of your sleep.

The grace of Lord Krishna can be attained only out of our true and selfless bhakti on him.

The most pleasant moment in our life is by the way of watching the divine beauty of Lord Krishna in his temples.