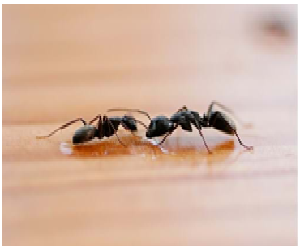 SIGNIFICANCE OF BLACK ANTS IN HINDUISM

Small Black ants are gentle insects, and they don’t bite others, even if someone cause harm to it. As per ancient legend, once the divine devas wanted to worship Lord Shiva in the earth, and hence they took the form of small black ants, and began to live in the Erumbeeswarar Temple, Thiruverumbur, Tamilnadu, and started worshipping Lord Shiva. They didn’t cause any disturbance to the devotees, and the devotees also used to fondly feed sugar and grains to the divine insects. And after some time, the ants were transformed into their original forms as Devas and went back to the heaven.

Red ants would bite us, whereas black ants would not do so, and it is also believed that killing of black ants is a sinful activity, since black ants are considered as innocent insects. It is also an ancient saying, that if black ants gather in large numbers in our homes, it is best to prepare Mothaks for Lord Vinayaka, since Lord Vinayaka’s beloved insect is black ant. Hindu dharma believes in the principle, “Live and Let Live”. Black ants are considered as auspicious insects. It is also believed, that if the black ants march in our house then there is a possibility of getting more wealth. But most of us are not welcoming the ants to our homes, by considering it as a nuisance for us.

According to the principles of Hinduism, god stays in the souls of all the living beings in the world. By considering this aspect, we must not have to cause harm to the ants, and we can offer some sugar and grains as food items to them. By doing that, we would get great Punya.  As per the sayings of Sri Paramacharya of Kancheepuram, if we are not able to offer food for 1,000 guests, at least by way of offering a little quantity of sugar to ants, would be considered as similar to doing food donation for 1,000 guests. Hence let us contribute a little food to the ants, which we would normally waste while eating the food, and let us get good results in our life.