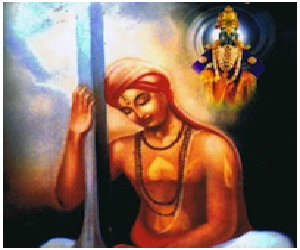 Sri Purandaradasa is a Kannada saint who lived during the 15th Century AD. He is considered to be an incarnation of Rishi Narada, who had born in this earth, in order to propagate the “KRISHNA BHAKTI” amongst the masses. Though he was a rich business man, but after he was interested in attaining sainthood, he left all of his belongings and went to the Vijayanagar Empire, which was ruled by Sri Krishna Deva Raya at that time.

He took shelter under the Holy Madhwa Saint Sri Vyasaraja, along with his family, and he served as a sincere disciple to him. He also wrote lot of devotional songs on Lord Krishna, and still now his songs are being heard by Carnatic music lovers and by the devotees of Lord Krishna.

After the Samadhi of Purandara Dasa during the year 1565 AD, his disciples and followers began to worship him, and his statue was also installed in various parts of Karnataka, in order to honour his divine service. His annual Aradhana festival is being celebrated for a few centuries by the people in Andhra Pradesh and Karnataka, during the month of February-March in a grand manner.  Purandara Dasa is considered as a father of Carnatic Music. The TTD is also arranging various music programmes during the annual aradhana festival day of Purandara Dasa, and in Mantralayam, Sri Raghavendra Swamy Mutt, his aradhana is being celebrated in a marvellous manner.

Similar to Sri Tyagaraja aradhana which is joyfully celebrated by the people in Tamil Nadu, Purandara Dasa Aradhana is also eagerly celebrated, especially by the people of Karnataka, and they consider him as their Divine Guru.  We can also worship Guru Purandara Dasa during his annual aradhana day, and also on Guru Poornima Day, since he is a great Bhagavata, and an incarnation of Rishi Narada. By worshipping him, we would get good knowledge in all the subjects, and all of our diseases would vanish from our body.