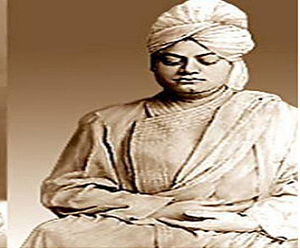 Sri Ramakrishna Paramahamsa, the great 19th century Saint and a staunch devotee of Kali Mata, was born in a village in the present day West Bengal to a pious Brahmin family. His birth name was Gadadhar.  Though he had married Ma Sarada Devi, but he treated her like the holy mother Ma Kali Devi, and showered great affection on her. Due to his high spiritual interest, though some people treated him as a mad man, but shortly everyone in his village began to realise his supremacy, and highly honoured him.

Due to his great devotion on Ma Kali, he served as a priest in Sri Dakshineswar Kali Temple, and due to his regular prayers, Ma Kali had emerged from the idol, and conversed with him about spiritual matters. Due to his great name and fame, he had got nice disciples like Swami Vivekananda, and both of them gave lot of good teachings and delivered excellent spiritual quotes.

Some of the golden spiritual quotes of Sri Ramakrishna Paramahamsa and Swami Vivekananda are as follows:

When the flower blooms, the bees would come to drink the nectar from it, similarly during our young age itself, we have to taste the sweetness of realising the almighty.

God is always ready to shower his grace on you, but you have to realise him fully.

The world is a mixture of Dharma and Adharma. We have to always follow the path of Dharma.

If you have become mad, be mad by showing your sincere love on God.

Lot of good things are there in the holy books, but we have to follow it in our practical life.

God is the supreme one, but since we are born as ordinary humans, we are suffering a lot in our life.

Only by becoming an honest person, we can realize the God.

Without allocating sufficient time for worship, whatever work we do only for our livelihood will become useless.

Pray to the God in order to get his mercy.

When the vision on the god falls on you, then you would become a most purified and a sin free person.

Keep doing your work continuously till you get the desired results.

First have faith on you, and then you can keep faith on the god.

Self-study alone would help you to grasp things quickly and easily.

Let your entire thoughts focuses on god, in order to shine brightly in your life.

God has given sufficient powers to us, but if we close our eyes, and if we are unwilling to work hard, then god would never come forward to help us.

Don’t blame anybody for your own mistakes.

By the way of developing good habits in our life, we can lead a highly prosperous life.