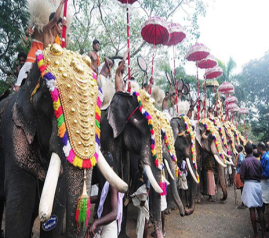 Some Hindu temples are maintaining elephants since ancient times. Elephants are brought up in the temples, in order to participate in the temple festivals, and to carry the idol of the deities on their backs during divine processions. Elephants in temples like Parthasarathy Swamy temple, Srirangam temple and Guruvayur temple are properly tamed and provided with sufficient food in order to discharge their duties properly. Usually, the mahouts in the temples used to collect money from us and make their elephant to bless us.

Some years back in the Mantralayam Raghavendra Swamy Temple, an elephant had become mad, and due to that, the temple authorities were avoided using the animal, and instead of that, the idol of Prahalad is being seated in an elephant chariot made out of silver and it is used during the temple processions.

The great poet Bharathiar, who once mentioned in his famous poem, that whenever he meets the death god, Yama, he would kick him with his feet, and would send him back. But he was attacked by the Parthasarathy Swamy temple elephant during the year 1921, and even after getting treated for his wounds, he died on 11th September 1921.

Hence we have to be very careful whenever we come across with any temple elephant, and must pray to Lord Vinayaka and the divine elephant Airavata before getting the blessings of the holy temple elephant.

Let us worship Lord Vinayaka and be blessed.