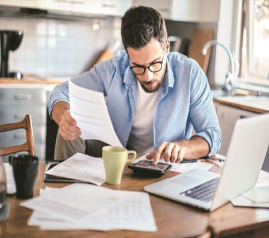 Work, this word would be recited by everyone in this world, and especially by the men. During the time of birth itself, the male child would be praised by the parents by telling “SON HAS BORN TO ME, FOR MAKING AN EARNING FOR MY FAMILY”. Nowadays women are also working for supporting their family, but if the women resign from their job in order to look after their family, no one would raise question on them, and their relatives also would welcome their decision. Whereas if a man resigns from his job, due to his poor health, no one would show sympathy on him, and instead of that, they would tease him, saying that, you are the male member, and you are the sole bread winner of your family, and hence you are only supposed to work, like that, they would tell.

Actually the position of men is very difficult. If some male members are good at work, and they contain a healthy body, then there will be no problem for them. But if the situation is reverse, then they will have to face lot of problems in their lives.

When a person takes a day’s leave from his office, then his neighbours would be asking him, “HAVE YOU NOT GONE FOR THE DUTY”. If a person takes leave for a week, then rumours about him would be spread in his nearby locality. According to a recent study, lot of divorces happens due to the unemployment problems of men.

According to a famous saying, ‘Don’t expect everyone to be genius. If you consider that a person is not genius and if he is not capable for doing a job, then teach the work patiently, and make the thing to stick into his mind by your kind words’.

But at the present situation, no one is ready to patiently teach the work to their subordinates. It may be due to the changing scenario and also due to the change in the minds of the people. In some companies, if a person takes some more time to finish his task, they are dismissing him immediately. Then if he goes home empty handed, then everyone in his family would scold him, and in some families, the family members would not even provide proper food to them.

In order to come out from all these kinds of problems in their life, men has to increase their competency and capability, and must be able to adjust themselves to the fast changing world. He should memorise the proverb, “WORK IS WORSHIP”, and must act accordingly.

Let us pray to the almighty to give great strength to all the working men and women in order to stick into their jobs permanently.