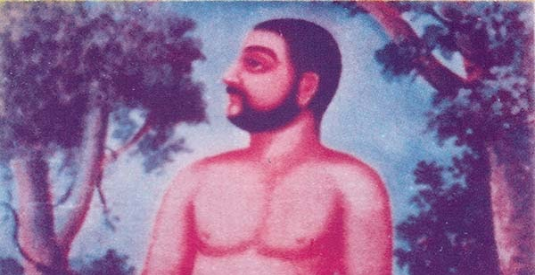 Sri Sadasiva Brahmendra(18 th century) was a great saint who lived near  Kumbakonam, Tamil Nadu. He composed many devotional songs and his birth name was Sivaramakrishna.

Sadasiva was born in a Brahmin family at Tiruvisainallur, and he learnt the Vedic education at his village. Since, he was not interested in leading a family life, he took Sanyasa, and he became a wandering saint in search for Athma
Gnana and he looked in naked form.  He was tested by many people and finally they got realized about his divine power and they had asked him to forgive them.

Sadasiva Brahmendra was a great saint who never thought about himself and about his physical appearance. He traveled to holy temples and installed many idols of the deities. He attained the great status of “ATHMA GNANI”, which means, that he had realized the god within his self. He had done many miracles in the life of his devotees, and
cured their diseases, removed the black magic and enmity problems, and he had given a peaceful life to all of his followers and spiritual seekers.

Even if the sun becomes cool or if the moon becomes hot, or if the flame cause chillness, but the true saint would never get changed, and he would remain always as a pious person, by clearly knowing that everything happens in this world due to illusions.

If we keep doing good activities in our life, like providing food to the hunger and poor people, removing the sufferings of the people, and consoling the depressed ones, we would totally merge with the god, and then there is no need to worry about our frequent births.

A true saint would always live a simple life, and he would use his shoulder as a pillow, would sleep in the earth by considering it as a bed, and would stay in the open place, by considering the sky as the roof top, and he is against from worldly bondage’s.

Those who stay away from the bad habits like lust, anger and greed, and those who contain good habits like generosity, adjust ability and patience, would be considered as “NOBLE PEOPLE”, and after their death, they would be warmly welcomed by the Divine Devas in the kingdom of heaven.

A true sage would accept anything and he is apart from likes and dislikes, and he sees everyone as the forms of the god.

Human sufferings can be reduced to a certain level, based on their good deeds.

Be polite and realize that god always dwells in your soul, and lamentation must be avoided.

Do your duty, be a kind hearted person and don’t try to earn wealth through dishonestly.

Stop your deep sleep, wake up from the bed, do your duty actively, and keep chanting the “RAMA MANTRA”, as much as possible in your life.