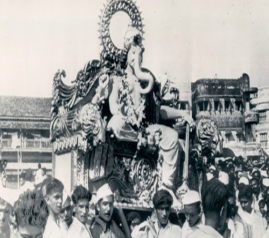 In ancient times, Vinayaka Chathurti festival was very nicely celebrated with perseverance and enthusiasm by the devotees. Hindus firmly believed that Lord Vinayaka would remove their obstacles, and believed the existence of the first god Vinayaka. Kings like Chatrapati Shivaji Maharaj had mainly introduced the practice of celebrating the Vinayaka Chathurti in a grand manner. During his period, big procession by carrying the colourful idols of Lord Vianayaka was taken place in the streets of Maharashtra, and the great saint and the Panduranga devotee, Sri Thukaram had insisted Shivaji Maharaj to grandly celebrate the festival of Vinayaka Chathurti, since it is believed that Sri Thukaram had got the division vision of Lord Vinayaka for several times in his lifetime.

During the year 1893, the great Indian freedom fighter and the Vinayaka Devotee, Sri Lokmanya Tilak has encouraged the devotees to celebrate the festival event of Vinayaka Chathurti in Maharashtra in a grand manner. He also participated in the Vinayaka Chathurti festival procession held in the streets at Mumbai, and apart from political activities, he has also cultivated great bhakti on Lord Vinayaka.

Devotees used to pray to Ganesha in order to get fulfilled their needs and desires. The main purpose of celebrating the Ganesh Chaturthi festival is to get rid from our sins, and to attain good knowledge and wisdom.
During this festival, people from all castes would come forward and would willingly celebrate their beloved god’s festival.

Now Ganesha idols are also made out of plants and flowers, as an act of environment friendly, and still clay idols are made by the vendors, in order to get it sold during the Vinayaka Chathurti festival, and apart from that, Vinayakar Kudai, also would be sold by them, since it beautifully decorates the idol of Lord Vinayaka.

Vinayagar Kudai also called as Pillayar Kudai is a small Umbrella which is made out of paper and small wood pieces. This Umbrella would be usually small in size and would cost around Rs.20/- to Rs.50/- based on the size of the Umbrella.

Normally these Umbrellas would be sold in the streets and in the newly formed pavement shops during the “VINAYAKA CHATHURTHI” festival day. Some vendors would carry these umbrellas during the early morning time of “VINAYAKA CHATHURTHI” festival day, and they used to busily walk in the streets, by loudly calling as, “PILLAYAR KUDAI VANGALAYO”. On hearing the loud voice of the vendor, small children would hurriedly rush over to the streets, and with their small savings, they would bargain with the vendors, and finally with a smiling face they would get their interested Umbrella for Lord Vinayaka.

After the purchase of the Umbrella for Lord Vinayaka, it would be placed on the back side of the newly bought mud Vinayaka and puja would be performed to Lord Vinayaka by placing all the required fruits, flowers and his favourite Mothakams by his devotees.

Though it is not compulsory to purchase a Vinayagar Kudai along with the idol of Clay Vinayaka, it is being purchased by most of the devotees, in order to express their love and affection on the elephant god. As per Vinayaka Purana, the great devotee, Vallalan used to perform Vinayaka Puja using fruits, flowers and also he used to place a small Umbrella like thing in the back side of the Vinayaka idol, in order to give shelter to Lord Vinayaka. From this incident, we can knew, that the system of keeping Umbrella behind the idol of Lord Vinayaka exists for several millions of years, and still now it is practiced.

Umbrella is used by us in order to protect ourselves from rain and from the hot weather. Similar to that, we are honouring Lord Vinayaka by keeping the Umbrella on his back. In ancient times, giving Umbrella to pious saints is considered as a noble activity by the kings. During 17th century AD, the great saint Guru Raghavendra had been honoured with a beautiful white Umbrella which was given by a Muslim king, Adilsha, who ruled the then region of Bijapur, since he witnessed the spiritual powers of the holy saint Guru Raghavendra through his own eyes.

Hence let us grandly celebrate this year Vinayaka Chathurti Festival safely in our home itself on 10.09.2021, and let us be blessed.