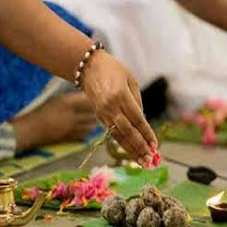 Shraadh known as Pitrapaksh or Kanaagath, Shraadh is performed over a period of fifteen days. The date or tithi of death, as per the Hindu calendar, is considered as the day of Shraadh. The other fifteen days are known as the Pitrapaksh.

Shraadhs usually fall somewhere between the months of August and September. During the performance of the Shraadhs, the departed members are invited to be a part of the family and feasts are organized in their honor.

The offerings in a Shraadh are made through a Brahmin because Brahmins are considered to be the highest of the four Hindu varnas. It is also believed that the Brahmins with rigid practices are directly connected to the spiritual energies of the world. However, offerings are also made during the Shraadh by donating to the poor and the handicapped. The donations are usually made in the name of the ancestors.

There is a huge significance of Shraadh offerings. They are as follows:

o   Through the offerings to the Brahmins, an individual can attain the Pitras or the Super Karma. The Pitras are believed to bring down suffering and enable the liberation of the individual from the materialistic pleasures.

o   Through the offerings made to the Brahmins, one can attain the Mukti or freedom for their ancestors. The Brahmins are believed to possess the capability to directly invoke the divine energies and transfer the departed soul to higher planetary plane of existence.

o   Donations offered to the poor affects those ancestors who are dwelling in the lower astral planes. This helps because the leaky auras of the poor helps the ancestors to more easily feed on them.

o   The performance of Shraadhs as well as offerings help in furthering of the belief of existence of life after death. It also helps in offering reverence to the departed soul.

o   The performance of Shraadh helps in getting the blessings of the ancestors and thereby helps in gaining positive karma and material prosperity in life.