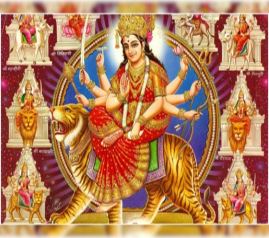 Similar to the Deepavali festival, Navaratri is also joyfully celebrated by the Hindus, and this festival is dedicated to the holy mother Ma Durga Devi. Since the festival of Navratri destroys the evil elements, this festival contains great spiritual significance.

Navratri festival is celebrated for nine consecutive days and it is celebrated with much joy, perseverance and devotion, and during these nine days, the nine avatars of Ma Durga are worshipped sincerely by decorating her with various ornaments, flowers and flower garlands. Keeping of Golu Dolls in their homes, also forms part of the Navratri celebration, and most of the devotees would buy dolls from the shops, in order to keep it in their Golu stand, as a token of expressing their great interest towards celebrating this auspicious festival.

During Navratri festival days, each and every devotee must worship Ma Durga by performing puja on these nine days, by keeping the picture of the holy mother on their puja room. Daily Sundal Neivedyam (Pulses Prasad) would be prepared by the devotees cleanly in their homes, and it would be offered to the holy mother while performing the puja. In the temples of Durga Devi, special pujas and decoration would be made to the deity for the entire period of nine days by chanting the divine mantras of Ma Durga Devi.

Regular prayers, chanting of Mantras and meditation activities also takes place during the Navratri festival days, and the devotees must take oath to remove their laziness, pride, lust, greed, Jealousy and other bad habits from their mind. Once when our negative thoughts are destroyed, our souls would be totally surrendered with Ma Durga Devi.

Ma Durga Devi represents the cosmic Energy, and it is also believed that only through the mercy of Ma Durga Devi, the entire universe functions properly without any disruption. Mother Devi acts as our mother, father, friend, philosopher, guide and Guru. Devi Puja is being performed in order to show our ultimate devotion on Ma Durga Devi. The puja is performed by us for the nine days in order to honour our holy mother. Out of the nine days of Navaratri, the Ayudha Puja and the Vijayadasami is celebrated in a nice manner by the devotees, and in most of the offices, puja would be performed either on or before the Ayudha Puja, and sweets along with Pori and Aval would also be distributed to the staffs, and in some companies, new clothes also would be gifted to their staffs as a part of their Ayudha puja celebrations.