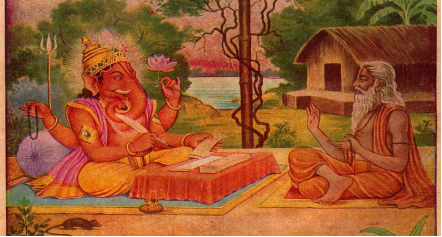 Krishna Dvaipayana also known as Rishi Veda Vyasa and Vyasa Bhagavan, was an ancient Sage, who lived during the previous Dwapara Yuga, and he was the author of the Mahabharata, one of the great Hindu epics. He contains the
features of Lord Vishnu, and in the Vishnu Sahasramana Stotra, he was praised, and his significance was also mentioned.

He was the son of Ma Satyavati and the great Sage Sri  Parashara . Vyasa is considered as an immortal, and he is believed to have been still living in the Badrikashram, and Guru Madhwa is serving him in a pleasing manner. Apart from Mahabharata, he also wrote various other Puranas, and he is considered as the father of our “ANCIENT HOLY TEXTS OF HINDUISM”. He is worshipped as a Holy Guru, especially by the Madhwa Community people, and the annual festival, “GURU POORNIMA”, is grandly celebrated and the festival is dedicated to Sri Veda Vyasa, in order to honour him, and he is still remembered by all the Hindus, for his wonderful contributions in the Divine field.

Everything exist in this world is highly perishable in nature, hence keep thinking about the god, sing his sings and praise him throughout your life.

Experience the joy of realising the god in your soul.

Do your work properly, and don’t expect the gains from that.

Even if you have plenty of wealth, but if you didn’t keep faith on the god, then there is no use in keeping the wealth with you, since spiritual wealth is very important, in order to get rid from our bad karmas.

Don’t think too much about your health, instead of that, always involve yourself in the spiritual thoughts of the god.

Live your life very carefully, since there would be lot of thorns on your path.

Nature coincides with the great almighty, and it is doing the duties perfectly.

We are all born only to win in the world, and for that, we have to take lot of efforts.

Lord Krishna would purify our mind, and would give lot of spiritual energy to us.

Even at the time of our death, we must keep chanting the names of Lord Krishna.

Let your body be broken into pieces, or let your body suffer from fire burns, but, even during that time also, you have to keep praising the Lord, and you must have to glorify him through your soul.

Lord Krishna shines like that of several million suns, and his beauty cannot be described fully by anyone in this world.

If you find that you are going in the wrong path, then reshape yourself through your own courage and will power.

The wise people would abandon the worldly attachments, and they would be having great interest in spiritual attachment.

Lust, anger, and greed are our worst enemies, and we must have to completely remove it from our mind.

Those who try to remove the sufferings of others would be having no sufferings in their own life.

In order to save the life of a person, you can sacrifice even your own life also.

Don’t find fault on others, first try to correct yourself, and be a good and honest person.

Even though people are seeing the death of others on their own eyes, yet, they are unable to leave their own desires.

Always be in the state of Krishna consciousness and believe that Lord Krishna is not an ordinary living being, but he is the supreme Lord.