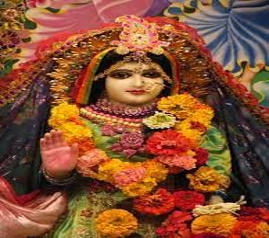 Radha also called as Radhika, Radharani, and Radhe, is a popular goddess and worshipped along with Lord Krishna throughout the world. She is regarded as the best friend and devotee of Lord Krishna. Radharani is considered as an incarnation of Ma Lakshmi Devi. She is the head of the milkmaids, and her birthday is celebrated as Radhastami.

She kept selfless love and surrendered at the lotus feet of Lord Krishna. Several vaishnavite saints were praised her glory and considered her as the supreme goddess. People in India, generally would keep names for their male child as Radhakrishnan and female child as Radha. Radha is worshipped mostly by the north Indians.

By taking Mata Radharani as an example who surrenders her aatma(soul) to Lord Krishna, similarly, we can also practice to develop such kind of devotion, in order to attain SALVATION after our death. The leelas performed by Radha and Krishna were known as RASALEELA. And the leelas performed by Lord Krishna with the Gopikas doesn’t mean any human bondage between them, but the enjoyment given by the divine avatar to the divine souls, and their main attachment related only with their heart, similar to the mother touching her child with care and affection. As per the comments given by the GOPIKAS, through the divine touch of Lord Krishna, they felt a sense of spiritual satisfaction, and great joy was spread all over their body, and they realized that were united with the god.

Radha and Krishna are the main characters as per the Article “Gita GovindaF” written by Jayadeva Gosvami.

The lovely names of Ma Radha Rani are as follows:-