Gayatri Mantra is the supreme mantra of the Vedas. Gayatri is the mother of universe, the Shakti itself. There is nothing she cannot do. Her mantra purifies the mind, destroys pain, sin and ignorance, brings liberation, and bestows health, beauty, strength, vitality, power intelligence and magnetic aura. Modern system of treatment is bereft of religion. Anybody who chants the Gayatri Mantra everyday can never be affected by diseases. Mahatma Gandhi believed that it protects both your body as well as soul. 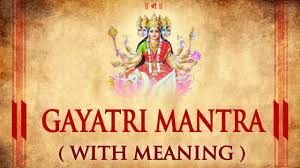 The Mantra word for word

The meaning of the Gayatri Mantra

The Gayatri is an Ancient Vigil

People all over the world are chanting this deeply moving prayer at this very same time. No matter what time of day or night you may chant, there are others chanting the mantra too. Gayatri is an ancient vigil surrounding the planet. The Gayatri Mantra is one of the keynotes for the transformation of consciousness and is an identical vibration to the vital force in nature. The mantra is most effective when chanted in its original language, Sanskrit. It is one of the oldest prayers known to humanity; its sentiment is as ancient as light. This prayer appeals to the highest wisdom, to the brilliance of the cosmos, to illumine an understanding of our true nature. The appeal requests that we become subtle and receptive to the divine wisdom that pervades the experience of life and is in essence our true nature.

This sacred prayer spirals out through the entire universe from the heart of the chanter, appealing for peace and divine wisdom for all.

The balanced qualities of the Gayatri Mantra

The Gayatri is a perfectly balanced mantra, yin and yang. The body or text of the Gayatri Mantra is feminine, and her message or invocation is masculine. Gayatri is the mother of the Vedas and this means the mother of all knowledge. She appeals to the masculine Savitur, which is said to be the radiance of perception and intelligence. This radiance, which is everywhere and in every experience, is likened to the radiance of our solar sun. In other words, all of the knowledge of the intricate ways of existence is contained within the syllables of the mantra, so too is the means and vehicle with which to go beyond worldly knowledge.

Gayatri Mantra’s vibration and influence on the physical body

Silently thinking or speaking or chanting the Gayatri Mantra influences the physical body, clears the emotional body, leading one to the inner heart1. The Gayatri stimulates and facilitates insightfulness and awakening to the Truth within all. Our energy centers, levels and rhythms are activated by the measure of breaths that are drawn in through the nostrils and released during recitation of the Gayatri Mantra (even during silent repetition) 2. This balances electromagnetic rhythm and energy currents in the body with prana. Prana is an undetectable life force energy which is similar to orgone3.

Gayatri teaches the chanter her secrets

By chanting the Gayatri Mantra, the mantra itself reveals the teachings within it. The Gayatri is flawless and whole. The Gayatri Mantra regenerates unobstructed perception in the same way that crops are renewed. For example, wind carries seeds onto the terrain. In time and by the right conditions, wild flowers and wheat inherit the fields. Again and again, an unobstructed flow, season after season, the Earth propagates her seeds and in turn the seeds flourish, grow and produce another generation. The mantra works like that, it is seeded by your chanting, and it expresses and propagates. Gayatri’s meaning is like the good season that prospers the Earth. Fruits come forth again and again. Like a surrendered seed is carried by the wind, we too surrender our intention into the universal intention and the Gayatri flowers in places and at times that we may be or may not be aware of. Gayatri is like the power in the sun. How can we really speak about such a thing, is it comprehensible at all? Any definition that you hear may be compared to just one grain of sand upon infinite shores. A definition can never indicate the immense significance and intensity of this great mantra. 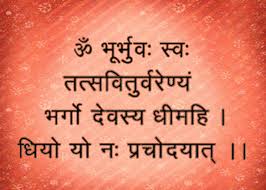 The Gayatri is a pearl from the depth

It is a jewel among the treasures that our Guru and Sishya lineage have handed down from generation to generation. To be initiated into this sacred mantra is a great privilege. The sound or even the thought of the Gayatri verse sets grace in action as we recognize the fortune we have in our life to live our highest ideals.

This jeweled Gayatri Initiation is a privilege for us

There was once a time when the Gayatri Mantra was not spoken outwardly, it was repeated only in silence or whispered on the tip of the tongue. This method of chanting is a very subtle and powerful way to repeat the mantra. There was a time when women did not chant the mantra. There was also a time when only the Brahman priests and no others chanted the Gayatri Mantra. Today everyone has the privilege to chant the Gayatri Mantra – and what an honour it is. It seems that the change came when the world events began to turn towards a darker time. Now millions of men, women and children from every walk of life repeat and chant this beautiful and powerful invocation. Because of its universal appeal and content, this mantra cannot rightfully be associated with a particular religion. The Hindus were the guardians of the Gayatri; they taught it and propagated it throughout the world. You could say that the Gayatri Mantra is their offering to the spirit of humanity and the awakening of all beings. However, the scope of Gayatri’s invocation is universal and transgresses all borders of secular religion.

Mantra is the matrix of existence

Sparkling in the sunrise and clinging to the fields, the morning dew appears by mantra. Then again it disappears by mantra, in the heat of the noonday sun. Everything that appears and disappears, in all of existence, does so by the power of precise sound vibration, pitch, length and tone, by a mantra.

1: Not only the well-known chakra system but all energy and rejuvenating centers are activated by the sound of the Gayatri.

2: The mantra works in a multitude of ways, which align the energies, magnetic currents, biochemistry and brainwave patterns on a very subtle level. Immediately or in time, one will notice the wonderful effect.

3: According to Wilhelm Reich (1897-1957) the universe is permeated by a primal, mass free phenomenon that is called ‘orgone energy’.