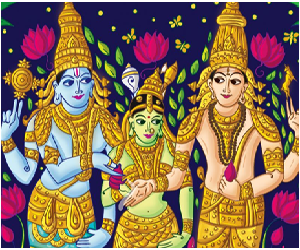 Meenakshi is the daughter of King Malayatwaja Pandiyan and Queen Kanchanamala, who were the rulers of Madurai. After she attained teenage, she conquered all the worlds, and proved herself as the supreme women among all the worlds, and later she went to Kailasa. On seeing Lord Shiva, she felt shyness and worshipped him. Lord Shiva had promised that soon he would marry her.

As per his sayings, after some time, he went to the earth and married with Meenakshi. During their marriage function, all the gods and goddesses were assembled in the earth to get the divine vision of the deities. That divine marriage function is still being praised for its sanctity and holiness, since the couples were not ordinary people. Though Lord Shiva, who is in the form of Sundareswarar, had prosperously ruled the kingdom of Madurai, but actually he was able to rule it only through the guidance of Mata Meenakshi.

Similar to their marriage function, Lord Srinivasa also called as Venkateswara was married with Padmavathi, a form of Lakshmi at the Tirumala Hills. During that function, all the divine devas from the heaven were participated, and it was attended by the holy sages in the earth also. Both of the two divine celebrity marriage              functions were took place approximately before 5,000+odd years.