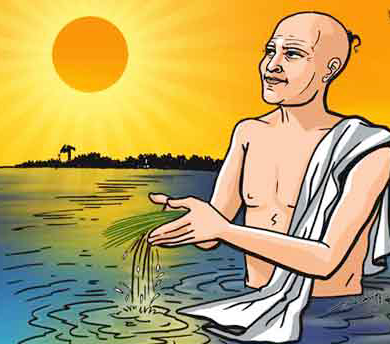 INTRODUCTION
Tarpanam is a type of Vedic practice and it is an offering made to the divine deities by chanting divine mantras. Tilatarpanam means offering made by a person to his deceased father / mother and to the Pitrus (Departed souls of our ancestors) using water and sesame seeds during the annual death ceremony or on Amavasya and other related days.
Tilatarpanam can be done in auspicious temples like Rameswaran, Srisailam, Kasi and Triyambakeshwar Temple, in order to remove our Pitru Doshams.
Tilatarpanam is made in favour of gods, demi gods, rishis, and to our fore fathers.
The main reason for doing Tilatarpanam is to relieve the sins of our fore fathers, and to make them to attain the divine world, and also by way of Tarpanam, we are offering food to them, who would be in hunger, and waiting for our food with anxiety, and if we doesn’t do tilatarpanam, our ancestors souls would get disappointed and they would curse us. Hence it is always suggested to do tilatarpanam to our father and mother after their death in a proper manner. Mainly it is suggested to do Tilatarpanam during Mahalaya Amavasya.
Let us worship Lord Vinayaka and be blessed.
“OM SRI VARASIDDHI VINAYAKARE NAMAHA”
WRITTEN BY
R.HARISHANKAR