What is Temple system?

Temples are an important part of the Hindu traditions and rituals. It is not mandatory to visit a temple regularly to offer your prayers and obeisance. People generally visit temples on festivals and other Holy days as mentioned in the Hindu calendar. Ever wondered about how this system came into existence?

Previously these enclosures or edifices which we now call Temples were made of simple materials like clay and the roofs were covered with leaves and twigs. Since these were perishable materials, they did not hold ground for too long and thus originated the concept of building temples with stronger materials like rocks, stones and bricks, in that order. Temples were built in caves in remote areas, mountain tops and hills in hilly areas and along river banks in the fertile areas of the plains. With the advancement in techniques, ornately carved figures on the pillars, columns, stairs and passageways of the temples came into existence. Temples were replete with designs, paintings, murals, frescos and sculptures. These different art forms depicted the holy verses, mythological characters, everyday lives of the royals and the common populace. The deities in these temples were considered to be the forces of nature protecting their territories and all those who lived within that region.

Roles that temples played in the olden times:
With several big temple structures that came into being, temples became places of social congregations. The high priests in the temples, who were considered messengers of God, were approached for performing rituals within the temple premises, propagating knowledge, administering justice and delivering discourses on the purity of body, mind and soul. Temples financially aided the needy, emotionally supported the deformed and disabled and structurally sheltered people during trying times. Temples also patronised several art forms like music, dance and dramatics. Temples disseminated information on the ideal way of life. People assembled at temples to sing bhajans and kirtans and listen to harikathas. More importantly, in ancient times temples provided employment to several artisans and mason working on building the structure.

Temples in different regions:
With the change in reign, every region experienced increased religious activities and sponsorship of temple structures. Temple complexes at Mahabalipuram and temples like Kailashnath, Vaikuntha Perumal and the Kashivishwanatha temple adorn the beauty of the South.

The East has a vast cultural history to boast of in terms of the Sun temple at Konark and the Jagannath temple in Puri. Central India has been blessed with the beautiful temples of Khajuraho and many others which depicted love in its truest form. The North and West are proud torch bearers of the Sarnath temple and Brahma temple respectively.

Since many South East Asian countries were ruled by Hindu kings, countries like Cambodia, Java and Bali stand testimony to the legacy and culture of the entire Hindu religion.

Architecture of Hindu temples:
Considering the vastness of land it comes as no surprise that the styles in the temple architecture are different in the North and South. What is surprising is that although temples in the North and South are different in style, the designs and patterns are starkly similar. Temples are rectangular, octagonal or semicircular in shape. The temple designs in the south are called Dravida and are typically abridged towers. The temple designs in the north are called Nagara and are rounded towers. A typical temple design found in the Deccan plateau commemorates the combination of both the Nagara and Dravida styles. It is called the Vesara.

Structural basics of temple architecture:
The Indian tradition of architecture called Sthapatya Veda believes that the temple structure and the town, put together, should resemble the universe. Hence temple architects back then made simple basic structural plans for temple complexes which included the following parts:

This is the area in the temple complex through which people enter or leave. While doing so, people ring the huge metallic bell handing from the roof, as a conduct of paying obeisance.

Temple hall:
This is the place after the front portico where devotees sit, assemble, sing, meditate and pray. This huge hall is lined by several pillars and columns which are decorate with murals and frescos. Also, this is the area where temple dancers used to perform in the medieval ages.

Sanctum sanctorum:
This is the innermost chamber of the temple called the Garbhagriha which houses the idol of the deity. It is a sanctum sanctorum which is generally square in shape. In most temples, only the temple priests are permitted to enter this chamber.

Aisle:
There is small aisle surrounding the inner chamber for people to perform the ‘pradakshina’ which means circumambulation around the deity.

Reservoir:
There is a customary reservoir of water in the temple complex from which water is drawn to perform temple duties. Devotees are requested to either have a customary bath or habitually wash their legs before entering the temple porch.

Dome:
Every temple has a high dome above its ceiling. The shape of the dome differs in different regions.
Steeple:

The steeple is the highest point on the dome. It is created to represent the tallest mountain peak mythologically called Meru. In several temples the steeple is in the shape of the Trishul which is lord Shiva’s trident.

As Hindus migrated in search of livelihood, they propagated Hinduism and the tenets of Hinduism to people across the globe. Temples, the basis of Hindu way of life found roots in those countries and became the cynosure of all eyes! Today, Hindu temples are present in almost all the countries in the world.

Those in India are nothing short of being called technological and artistic marvels. The Lotus temple, Aksharsham temple, Iskon temple and many more such colossal structures present in modern India are completely unsurpassed. Several more temple complexes and structures are currently being made which will always be unparalleled and legendary in the history of Hindu religion. 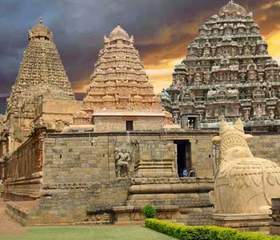