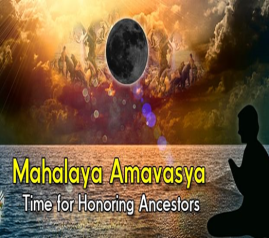 According to Hinduism, the departed souls of our ancestors would reside in Pitru loka, a divine world between the heaven and earth. This Pitru Loka is under the control of Lord Yama, the death god, and he is the one who takes the soul of the dead ones from earth to Pitru loka.

By performing the rites of our ancestors during the Mahalaya Amavasya day, it is believed, that in course of time, they would shift from pitru loka to the heaven, and would enjoy all kinds of comforts in that divine world. But we must have to do it properly, and we should not postpone it to some other day.

On the Mahalaya Amavasya day, we can perform the rites for the departed souls either in our homes, or in temples. According to legend, when Karna died in the Kurukshetra war, his soul was transferred to heaven, and there he felt very hungry, since Karna was donated only gold and jewels to the people as donation, and he didn’t give food donation throughout in his life time.  Due to that, Karna was returned to earth for a period of 15 days, and done last rites to his ancestors, and donated food and water. After that he got relieved from hungry, and went back to the heaven, and in course of time, he had permanently settled in his father’s abode, the Surya Loka.

The Pitru rites must be compulsorily done by the son, to his deceased father and to his ancestors, in order to pacify their souls. According to Garuda Purana, those who properly perform the pitru rites to their deceased father as well as to their ancestors would reach the divine world as per their wish. During the Mahalaya Amavasya day, the food should be prepared in a hygienic manner, and it should be served in a proper manner to the family members.

Some Hindu families used to recite the Bhagavata Purana, Garuda Purana and Ramayana during the Mahalaya Amavasya day. Some people may provide food to the poor people by visiting to the old aged homes for the well-being of their ancestors.