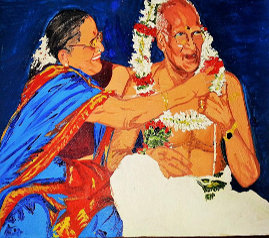 During the event of Sathabhishekam, various pujas, Abhishekhams would be performed to the deities along with Homams, either in their homes, temples or in the marriage halls in presence of their family members like sons, daughters, grandsons and granddaughters. During this auspicious ceremony, young age people would get blessings from the elderly couple, in order to shine well in their life.

During the time of Sathabhishekam, the elderly couple would exchange garlands, and would shower their love and affection on each other in front of their relatives, friends and well-wishers. It is also believed that those who perform Sathabhishekam would get a good health and at the time of their death, they would get a painless and a fearless death.

Sathabhishekam would be usually done on the 80th Star Birthday of the person, and this ceremony removes previous birth sins and also would generate good karmas to the elderly couple. The ritual consists of worshipping lot of deities like the Kula Devata, Lord Vinayaka, Muruga, Vishnu, Shiva and Shakti.

During ancient times, Sathabhishekam would be done in a grand manner by calling all of their friends, relatives and even their servants to attend the function in order to make it into prosperous. After the completion of the function, food would be offered to their relatives and to those who present in the function hall and the elderly couple would send off the attendees of the function to their homes, with a lovely smile.