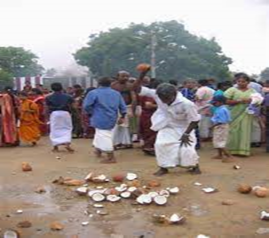 Whenever, before we begin a new task, coconuts would be broken to the deities in the temples, and especially to Lord Vinayaka.  Lord Vinayaka being considered as the first god, it is our main duty to offer our first respect to him, and hence by the way of offering coconuts to him, we are rendering great divine service to the beautiful elephant god Vinayaka.

As per ancient legend, once when Lord Shiva decides to grant boons to his demon devotee, Bhasmasura, he didn’t offer his first prayers to his son, Vinayaka. As a result, after giving the requested boon to Bhasmasura, Shiva had to flee from that place for saving his life. Then he realised his mistake, and sincerely worshipped Lord Vinayaka, in order to get relieved from his troubles. Lord Vinayaka felt pity on his father Shiva, and then he immediately prayed to his uncle Lord Vishnu, to safeguard his father from the clutches of the demon Bhasmasura. Due to the grace of Vinayaka, Vishnu transformed himself into a beautiful woman, attracted the demon, and killed him cleverly and thus saved Lord Shiva.

Mostly students would pray to Vinayaka before their exams, and after getting positive results in the exams, they would come to the Vinayaka temples along with their parents, and they would eagerly break the coconuts, one by one, and mostly it would be 108, and some poor people also would take away the broken parts of the coconuts in order to consume it.

God has gifted many things to us, like the human body with proper body parts, good health and wealth, and many more. Hence it is our main duty to thank him by the way of offering our worship to him. And out of the several forms of divine service to the god, like performing pujas, offering Prasad items, singing songs and reciting mantras, breaking of coconuts is also considered as a best divine service which we offer to the god in a most satisfactory manner.

It is also believed that those who suffer from health issues like nervous disorders, lack of memory power, head ache, would get relieved from their ailments, if they keep sincere faith and bhakti on Lord Vinayaka and if they break coconuts on the monthly Sankatahara Chathurthi days, and also during the annual Vinayaka Chathurthi festival day. In ancient puranas, it was mentioned that breaking of coconuts to Lord Vinayaka is also one of the methods of worship to him. The great Vinayaka Devotee Vallalla who belongs to the Treta Yuga, had got the habit of breaking coconuts to Lord Vinayaka, while performing puja to him.

2022-01-07
Previous Post: Temples Are The Most Sacred Places In The Earth
Next Post: Kothanda Ramaswamy Temple, Rameswaram