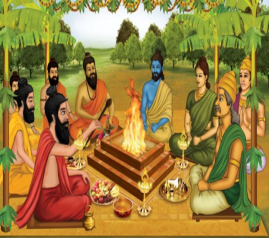 Yajna also known as Homam would be done during the performance of rituals, by sitting in front of the sacrificial fire, by chanting the divine Mantras, in order to sanctify the Vedic gods and goddesses. The term Yajna was mentioned in the Vedas and also in the Puranas. Yagna includes offering of oblations to the respective Vedic deities, in order to get their blessings. By performing Yagnas, we would get relieved from our various diseases and we would prosper in our lives.

Yajna would be done in the temples and also in the Hindu weddings.  A Yagna would be done with the fire, and the divine Agni, would help us by passing the oblations to the respective Vedic deities. By doing the Yagnas, it is believed that the Vedic deities would grant boons and fulfils our wishes. Yajna, is an act of surrendering ourselves before the deities, and while performing Yagna, various products like ghee, milk, food grains, and few other substances would be offered to the holy fire, as a token of expressing our love and gratitude towards the Vedic deities.

Some Yagnas would last only for a few minutes, whereas some Yagnas would take several hours to finish it. Yagna occupies a major role in the Hindu weddings, and it is believed that if marriages are made in front of the fire, then the marriages would sustain for a long period. The marriage ritual of Panigrahana, is an act of ‘holding the hand of the bride by the bridegroom’ in order to express their strong unity before others.

The Saptapadi is the most important ritual in Hindu weddings, and during that time the couple who are supposed to get married would walk around the Holy Fire (Agni), by considering that the fire god, Lord Agni Bhagavan, act as the main witness for their marriage. Even the great Vishnu Avatars, Rama and Krishna’s marriages were made in front of the sacrificial fire.  We can also do Yagna in our homes and in the temples, for bringing peace and prosperity to the entire nation. Yagnas would be done to pacify the Vedic gods like Yama, Shiva, Indra, Varuna, Saraswathi, Chandra and Surya. Ancient sages would frequently perform Yagnas in order to make the entire universe to prosper. Even the pious demons like Prahalada, Mahabali, Namuchi and Vibhishana have done innumerable Yagnas, in order to please the Vedic deities.

Nowadays Yagnas are also being done in the special institutions like mental institutions, orphanages and old age homes, for the well-being of their occupants.