In: Temple rituals
With: 0 Comments 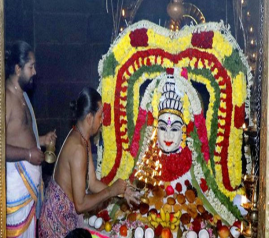 Annabishekham means offering of cooked raw rice to Lord Shiva during the Full moon day of the Tamil month Aippasi in most of the Shiva Temples, and especially this event would be grandly celebrated in the Brihadeeswara Temple, Thanjavur.

Similar to performing various Abhishekhams to the Shiva Lingam, like curd, milk, honey and oil, Annabishekham, is a type of Abhishekham where cooked raw rice would be adorned to the Shiva Lingam, in order to express our thanks to Lord Shiva, for giving abundant food to us throughout our life. Food only satisfies our body, and it also helps us to sustain in our life. Without food no one can live in this world. Hence it is our most important duty either to take part in the sacred Annabishekham event held in the temples, or otherwise, at least we can watch it from the YouTube Videos.

As per legend, once Lord Shiva had chopped one of the heads of Lord Brahma, in order to remove his ego. Due to that, Lord Shiva began to suffer from severe Brahmahadhi Dosham, and the head of Brahma which was removed by him began to Stuck down in his hand, and it became a begging bowl for Lord Shiva. On seeing the pitiable condition of her husband, Ma Shakti Devi took the form of Ma Annapurna, and she fed sufficient quantity of food to Lord Shiva in the bowl in the sacred city of Kashi. Due to the spiritual powers of Ma Annapurna, after the food was fully eaten by Lord Shiva, the skull was disappeared, and Shiva was also got rid from the Brahmahadhi Dosham.

During the time of performance of Annabhishekham , the entire Shivalinga is covered with cooked rice, and fruits and vegetables also would be added along with the rice. During this auspicious event, recitation of Shiva Mantras like, Lingashtakam, Rudram and Samagam would take place.

Among the deities, Lord Shiva is considered as the supreme one, and his consort Ma Annapurna is considered to be the goddess of food, and hence by performing and participating in the Annabhishekham event performed to Lord Shiva in the Shiva temples, we would get abundant food throughout our life, and we would never suffer from hunger and thirst at any point of time.