In: Rituals, Temple rituals
With: 0 Comments 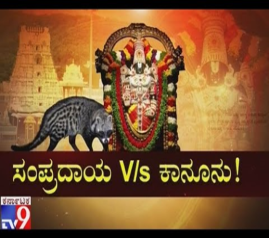 The Punugu Perfume is a Special Scent Used in Tirumala Temple, and this scent is derived from the Punugu Cat.

Tirumala Tirupati temple is one of the popular and richest temples in the world, and it is also famous for performing different kinds of rituals with much interest and enthusiasm.

Usually in different Vishnu temples while conducting pujas, aromatic substances like Javadhu, Kasthuri, Akhtar and punugu would be used in order to make the deity to look more beautiful and attractive. Similar to that, in Tirumala temple also the best perfume Punugu is used in order to beautify the Seven Hills Lord, Sri Venkateswara.

In order to get the fresh Punugu perfume, the Tirumala Tirupati Devasthanams are growing up civet cats, along known as PUNUGU POONAI, in order to extract the sacred Punugu perfume from those pious animals.

Civet cat, are affectionate animals which would be found in the dense forests, and for growing up those animals, suitable cages must be used. And since these are considered as very rare and precious animals, the TTD authorities are keeping these animals in good atmosphere by providing necessary food to them.

As per ancient Puranas, civet oil is considered as the favourite item of Lord Venkateswara, since it adds more glamour and beauty to Lord Venkateswara. TTD authorities are procuring these animals from the tribal people by paying the prescribed amount for that.

Similar to applying various scented items and spraying powder on our body, the god of the seven hills is also interested to apply nice Punugu scent on his divine body, since the great Lord Venkateswara is not a mere statue, but imbibed with full of spiritual energy throughout his idol. Even some devotees used to comment Lord Vishnu, as if he spends his entire time in sleeping, due to their personal problems. But they didn’t realise, that Lord Vishnu would never sleeps, and he used to always perform Yoga Nidhrai, meditation sleep. If we see god by considering him just like a statue, he would appear only in that form, whereas, if we consider him as a supreme god, then he we can see his shining face, and can realise that the powers of the god dwells in his idol.