In Hindu religion, the Banyan tree or the Vata Vriksha is considered most sacred amongst all other trees. Banyan tree, scientifically named Ficus benghalensis, is considered immortal and is greatly revered since the Vedic times.

Again, Buddhists also held the Vata Vriksha or Bo-tree in great adoration as Lord Buddha, the founder of Buddhism, had attained his enlightenment while meditating under the same tree.

In Hindu symbology, Vata Vriksha is a perfect personification of something which is strong, standing firm on the ground with all virtues and virility. ‘Eccha Vriksha’ or ‘Wish Tree’ is another name given to this tree. The tree is also rich in medicinal value and various drugs are prepared from its various segments. 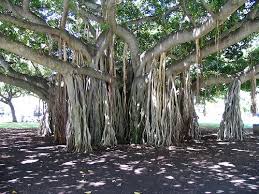 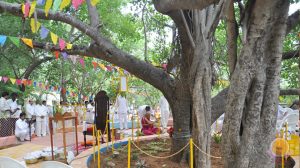 As per the historical and botanical sources, the oldest Vata is found at Prayag (Allahabad), an ancient Indian town. Many ancient Indian scriptures including Aitareya Upanishad, Ramayana, Brahmana, Uttar Ramcharit have given reference to the Vata tree indicating the significance of the tree which dates back to the Vedic period.

Such is the importance of the Vata tree in the Hindu religion that many gods including The Trinity (Brahma, Vishnu, Maheash), Kuber, Lakshmi, Krishna, Sasthi etc. have been symbolically represented as the sacred Vata tree.

Based on Brahmapurana, William Crooke has referred to, interpreted, and recorded the Vata tree as, “Rishi Markandeya had the presumption to ask Narayan to show him a specimen of his delusive power. The God in answer to his prayer drowned the whole world in a sudden flood and only the Akshaya Vata or imperishable banyan tree raised its head above the water, with a little child seated on its topmost bough, which put out its head and saved the terrified saint just as he was on the point of drowning.”

There is a popular legend associated with the origin of the Vata tree or Vata Vriksha. It just so happened that once Lord Shiva and his consort Parvati were engaged in amorous dalliances in an isolated place. Upon the instigation of the Trinity – Brahma, Vishnu and Maheshwara – Agni intervened appeared on the scene on the pretext of sharing some joke. This inappropriate gesture made Parvati extremely furious and she cursed the instigators and metamorphosed –

People of Indian subcontinent have been worshiping Vata tree since the time immemorial. The tree has been referred to in various names. The different names of Vata in different Indian languages are as follows – 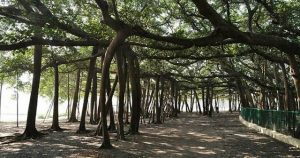 On the 15th day of the month of Jyestha (May-June), women in Maharashtra and Gujarat pay obeisance to Vad or Vada as part of the Hindu ritual. As per the ritual in eastern India, on the special occasion of ‘fertility’ puja during the Shasti Puja, the branch of Vata is compulsorily used. People of Bengal especially worship the Vata tree as Lord Brahma himself on Saturdays during Jyestha.