Shani dev married or not?

Shani is the son of Surya Dev (Sun god) and Goddess Chhaya (Goddess Shade). He is also the brother of Lord Yama (god of death).  Shani dev is called “Karmafal Daata” (Lord of Justice) as he was given the authority to reward or punish people for their good and bad deeds.

Once Shani was born, Sun god glanced at the new born baby so fondly. When the baby was so black in color like charcoal, sun god was put down and was heavily disappointed. In fact, he doubted that someone else was the father of Shani since Sun god himself was dazzling white in color. This doubt and ill-treatment angered Shani and he cursed his father also to turn black in color. Later Lord Shiva resolves the doubt of Surya and tells him Shani became black in the womb due to Surya’s own heat. Since then, Surya and Shani developed a good mutual understanding.

As per an ancient story, Shani Dev got married to Dhammini who was daughter of Gandharvaraj Chitrarath. Mangal Dev and Indra Dev were enemies of Shani Dev.

To avenge their insults which they faced because of shani earlier, Mangal Dev curses Dhammini with Mangal dosh in marriage house of her horoscope. The direct effect of this curse comes to Shani.

On their first night after marriage, Mangal dosh shows its effects and unconsciously Dhammini curses Shani Dev that the person at which Shani will look will be turned to ashes. This Drishti of Shani is called as “Marak Drishti”

Earlier when Shani was child, Mahadev blessed him with Divya Drishti (also called vakra Drishti). It allows Shani Dev to read the past deeds of a person he puts his Drishti on.

But after the curse this Drishti became useless, as he cannot watch anyone or they will be turned to ashes.

Even in this state Shani managed to capture Mangal Dev and Indra Dev and threaten them with his Marak Drishti. He told Mangal Dev to take away Mangal dosh from Dhammini or else it will cost him his life.

Dhammini felt guilt that she cursed Shani for no reason but the curse given to Shani cannot be taken back so the sight of Lord Shani remains downward forever.

How to please Shani dev:

Shani dev is a strict disciplinarian. By observing austerities, not drinking alcohol and not telling lies, one can please Shani Dev. Shani dev likes charities. Giving alms to the poor, donating clothes, blankets and footwear to people, donating black cows and buffaloes to Brahmins and the needy are sure ways to win the blessings of Shani dev.

Unlike some misunderstanding, Shani dev is never cruel to anyone. No doubt Shani’s positions in horoscope can bring misery and misfortune. However, the fact remains that Lord Shiva has given Shani the responsibility of rewarding or punishing people as per their good or bad deeds. Therefore Shani is only giving the fruits of people’s actions. In fact when a person repents for his mistakes and engages in good deeds, Shani will easily get mollified. 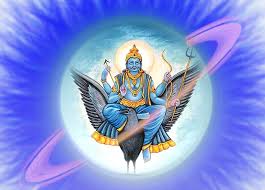