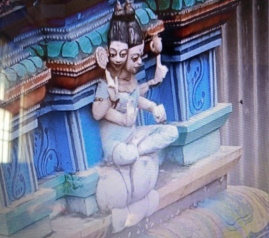 Usually we could find in the pictures of Lord Brahma, who would be holding the Vedas, the sacred Japa Mala and the Holy pot, Kamandala on his hands. If we verify our holy Puranas, in that, it was mentioned, that Lord Brahma was the giver of boons to the demons, and most of the demons would obtain boon only from Lord Brahma after performing rigorous meditation on him. The picture attached here is photographed from the temple tower of Ma Bhavani Thulukanathamman Temple, which is an ancient 100 years old temple, and this temple is located in Parthasarathy Street, Agaram, Peravallur, Chennai – 600 082. In this picture we can find that Lord Brahma holds the sacred Sudarsana Chakra and the Chanku( Conch Shell) on his hands, which is a very rare appearance.

It may be surprising for us, that even Lord Brahma had killed a few demons, in order to maintain DHARMA in the world. If we refer to the holy Padma Purana, in that, it was mentioned that once Lord Brahma had killed a demon whose name was Vajranabha, through his divine lotus flower and during that time, some petals of lotus flower also fell down in the ground, and it began to be formed into the Holy Pushkar River. There is also a famous temple dedicated for Lord Brahma near by the Pushkar River, and it is known as “PUSHKAR BRAHMA TEMPLE”. Demon Vajranabha’s brother was Sudarmanabha. After knowing about the death of his brother, Sudarmanabha challenged to fight with Brahma with his powerful weapons. After fighting for a while with Sudarmanabha, Brahma was defeated and disappeared. Then Brahma went to Vaikunta and sought Vishnu’s help to defeat Sudarmanabha. Lord Vishnu had agreed and gave his Chakra and Chanku (Holy Conch) to Brahma and blessed him.

Brahma went to the present place of Pushkar and had loudly blown the conch shell in order to invite Sudarmanabha for waging a war with him. The angry Sudarmanabha returned to the battle field without knowing about the powers of the great Vishnu Chakra. This time, Lord Brahma easily killed the demon with the Chakra given by his father Lord Vishnu. It is also believed that since the divine Chakra had killed the demon Sudarmanabha, thereafter, it came to be known as Sudarsana Chakra.

There are lot of interesting incidents mentioned in our holy Hindu Puranas, and we should not consider it as merely fictitious stories, but, we have to read it with full of devotion, since each and every story teaches nice lesson for us.