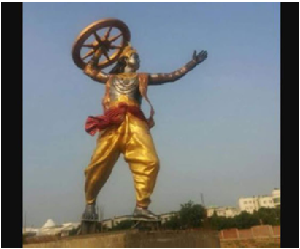 Kala Chakra also called as Time Wheel is a concept which is mentioned in the holy texts of Hinduism. It means the changing situations in the world and also in our life, and in simple terms Kala Chakra means passage of time. And this Kala Chakra is functioning with the help of Lord Krishna. According to his famous saying in                     the Bhagavat Gita, “I am the one, who is fixing the Kala Chakra. The time passes only through my actions. Through this passage of time, various Yugas have been passed, and several millions of years were completed, but I would never change”.

According to Hinduism, there are actually four yugas, and each and every yuga consists of few lakhs of years. So far, we have crossed the Satya Yuga, Treta Yuga and the Dwapara Yuga. Now we are in Kali yuga. In this Kali yuga, we have 432000 years. And so far, we have crossed only 5,000+odd years. Still we have to cross the remaining 426000+ odd years to reach the end of the Kali yuga.

A human’s life cycle consists of childhood, young age, teenage, middle age and old age. At one point of time, anyone who has born in this earth must have to die at some time or other time. There is no permanency for anyone. Lot of great kings, famous rishis and saints after living their life for many years, either might have taken re-births or attained salvation, as per their karmic deeds.

Some kings would have enjoyed lot of physical pleasures in their life, they would have eaten rich food and they would have enjoyed each and every moment of their life. But after their death, nothing belongs to them. No one can take their riches along with them after their death. That everyone knows, but still we are committing lot of mistakes in our life. We are harassing others, valuing the people according to their status, underestimating the people according to their appearance, using bad words on others, ignoring the poor people, and hating them etc. All these acts are not considered as good by the almighty, and at any point of time, we can get a call from the death god Lord Yama Dharma Raja. But we are not at all thinking about that, and still we are doing as we like.

Some people used to say,                   “I am only a young and healthy person”, and at present, for me, there is no need to worry about death. Let me do good things at the later stages of my life, and even if I commit lot of crimes, if I sincerely pray to the god, he would forgive my mistakes”. Some people are having such kind of thoughts in their mind. But actually it is not like that. God would never show mercy on us, when we do wrong acts, and he would never forgive us also, when we does wrong things intentionally.

If we study the holy texts, like Ramayana, Mahabharata and Bhagavatha, even the pure among the purest persons, have reached their end. After living their life for many years, finally they must have to retire compulsorily from this earth. They cannot postpone it even for a second. Lord Rama had departed from this earth, after successfully ruling the Ayodhya kingdom for a period of 11,000 years. Similarly Lord Krishna had left this earth and reached Vaikunta after the completion of 125 years in this earth, if there is an end, for the divine avatars then what about our position? For the divine avatars, there is no need to worry! Definitely they would reach the divine worlds after their departure from the earth. But, we are all ordinary people, and every day, we are committing lot of mistakes, whether intentionally or unintentionally. For all those mistakes, we have to take various births after our death. We cannot escape from the calculations made by Lord Chitra Gupta, divine accountant of Lord Yama Deva.

Hence, hereinafter, let us show our true love and affection on each and every one, we should not hurt others either physically or through verbally, and especially we should not show partiality between rich and poor, and we must consider all kinds of people as equal, irrespective of their status, caste, creed, gender and religion, and we must develop strong universal brotherhood.

Let us pray to Lord Krishna, and be blessed.