From time immemorial animals have been some of the closest and dearest companions of man. They were so much a part of the social life of men that they were even used as religious symbols by the Hindus. Some archaeological evidence even goes on to suggest that some of the ancient temples and dwelling units were surrounded with animals.

A testimony to the sacred nature of these animals is the fact that some of them were considered as the ‘vahana’ or vehicle of Gods and Goddesses. A few such examples are as follows:

Bull or Nandi- Vahana of Shiva and Parvati
He-Goat- Vahana of Agni
Buffalo- Vahana of Yama (God of Death)
Swan- Vahana of Saraswati
Parrot- Vahana of Kamadeva
Makara (the sea monster)- Vahana of Vanma
Peacock- Vahana of Kartikeya
Another testimony to the above fact is that Garuda, the mythological bird, is still respected by many devout devotees. Birdwood once recorded that,” Garuda, the king of the birds, the mystical being foreshadowed by Arva and Tarkshsa; half man and half eagle or vulture is the vehicle of Vishnu, and represented as a great enemy of the Nagas.” Naga or snake worship is very much an integral part of the Hindu religion. 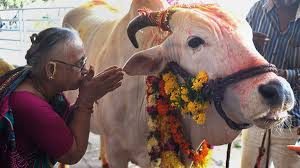 The significance of animals and birds can also be found in the mythological legends and epics. In Ramayana, Jatayu, the king-bird, gives a stiff resistance to Ravana, when he was kidnapping Sita. Further Lord Rama could not have overcome the mighty strength of Ravana, without the aid of the monkey army. In 1897 Abbe J.A. Dubois recorded, “The cult of the monkey Hanuman extends over the whole of India. The followers of Vishnu are especially devoted to this deity, but all are ready to give him a share of their homage. Images of Hanuman are to be seen in most temples and in many public places. They are also to be found in forests and desert spots. Indeed, in those provinces, where there are many followers of Vishnu, you can scarcely move a yard without coming across an image of this beloved God.”

The worshipping of Hanuman is very much prevalent in Northern India. On every Tuesday thousands of devotees of Hanuman pay obeisance to him and even fast for him. Similarly, in Shaivism, Nandi or the Bull is widely worshipped. Many of the Shaivite scholars state that, “the original reason for associating the bull with this god was simple, the great masculine potency which each embodies, and the rage and physical power of which both are capable.” However, unlike the Lion of Goddess Durga, Nandi is often regarded as the docile vehicle of Shiva and is counted as the symbol of Dharma. Further, researchers have concluded that, “(Nandi stands for) Shiva’s ability to burn away sloth, ignorance and evil, ensures the constant renewal of fertility, correct motivation, and religious aspiration; thus he perpetuates the condition in which all levels of dharma can flourish.”

Another such animal deity is the Snake or Sesha-Naga, which is also known as Ananta (Endless), Vasuki, etc. Naga is considered as the vahana of Vishnu as is evident from the image of Vishnu, since we find that the Naga encircles the entire body of lord Vishnu and the eight heads of Sesha Naga provides a canopy to the sleeping posture of Vishnu. Vishnu’s avatar, Krishna, was also protected by the Sesha-Naga, when the turbulent storm over the Jamuna had tormented him. It is also widely believed that Krishna had churned the wide ocean with the help of Vasuki. Naga propitiation, since ancient times has been regarded as the cult of serpent worshippers or the ruler of the underworld or patal. There are exclusive Naga shrines too, where they are kept, fed and regularly worshipped.

The high regard for snake is also testified by the fact that in South India, women encourage their children to setup snake stones or naga-shilo. The Manasa cult,that originated in Bengali is widely prevalent even today. These symbolic references are not only spiritual personifications but are also regarded as source of inspiration for artists and sculptors alike as is evident from the presence of animal motifs in Hindu art and sculpture.