Bilva (Aegle marmelos) leaf is an embodiment of Lord Shiva and hence Bilva tree is considered extremely sacred in Hinduism. The tradition of using Bilva leaves in Shiva puja is prevalent all across India.

Bilua in Sanskrit
Bel in Bengali and Hindi
Bili in Gujarati
Kusoalu in Malayalam
Villuvan in Tamil and
Maredu in Telugu.
Religious Importance 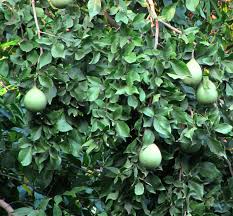 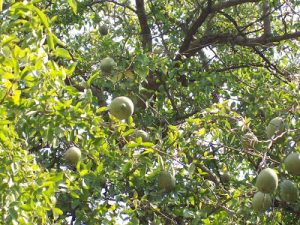 The spiritual significance of Bilva permeates the Hindu religious customs. It is said that by worshiping Lord Shiva and his consort Parvati with sacred Bilva leaves, a person is endowed with divine bliss.

In Hindu pantheistic studies, Bilva is the symbolic representation of many Hindu gods and goddesses including Shiva, Parvati, Surya and Lakshmi (goddess of Wealth). But, particularly the Bilva leaf is a favorite of Lord Shiva to the extent that no Shiva Puja is considered complete without offering him Bel patra or Bilva leaf. So deep is the association of Bilva tree with Lord Shiva that he is given the name ‘Vilvadanda’, meaning staff of the bel-wood.

The importance of Bel or Bilva tree is tremendous in Bengali tradition. During Durga Puja, which is the prime festival of West Bengal, goddess Durga is evoked with the twig of Bilva leaf following which the prayer connoting the following phrase is recited.

– “I shall get hold of thee and worship thee as the Goddess Durga. Thou art Sriphala. Thou art great virtue, and always dear to Sankara. I welcome thee, in order to invoke the Goddess Chandika.”

In Hindu religion, breaking or cutting off a Bilva tree branch is considered sinful as Ghost Gods (Brahmodaitya) reside under this tree. The fruit of the Bilva tree is named ‘Sriphala’, meaning the fruit made out of the milk of goddess Sri (Lakshmi).

Bilva branches are especially used in kindling sticks during the puja and this represents the spiritual light ignited from the yonder Sun.

The Origin of Bilva Tree

Some mythological sources have defined the origin of the Bilva tree as, “The Gods thought of making storage for yonder Sun who did not shine; they offered a white cow to Surya, thereby they restored his brilliance. The Bilva tree was born at the very reappearance of yonder Sun.”

In Skanda Purana the origin of the Bilva tree is defined and the text was later explained by Mahant Rama Shankar of Banaras in the following manner. “One day while Parvati was resting some drops of sweat fell from her forehead on the mountain Mandara, from which grew the bel tree, Girija lives on the root of the tree, Maheswari on its shoulder, Dukshayani on its branches, Parvati among its leaves, Katyayani in its fruit, Gaori in its flowers while in thorns the numerous Saktis find a home. It is also believed that Lakshmi, the Goddess of Wealth, also lives in the bel tree.”

In the word of famous indologist Dr. Sankar Sengupta, “These leaves on the lingam cool and refresh the heated deity. Its trifoliate leaf or tripatra symbolises the three functions-creation, preservation and destruction-of the Lord as well as His three eyes.”

The three forked Bilva leaf is symbolic to three universal gunas – Sattwa, Rajas and Tamas. All different parts of Bilva tree are infused with valuable medicinal properties. The root, leaf, bark, flowers and fruit of the tree are used in curing all types of snakebites.

The Bilva or Bael fruit is extremely useful in treating various intestinal ailments. The ancient Ayurvedic system of medicine refers to the usage of its leaves for treating chronic constipation, dyspepsia, and dysentery. In a well-known Ayurvedic tonic named Dasamularisht, Bilva is one of the ten core ingredients.

As mentioned in ancient Indian scriptures, those who wear amulet made up of Bilva, their family is immune from every misfortune.