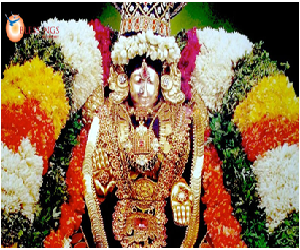 But nowadays some activist groups are opposing the act of wearing the Holy Thirumangalyam by the ladies, and they are also considering it as symbol of slavery for the married women.

But actually it is not like that. Whoever wears Thirumangalyam would be blessed by the Divine Devas in the heaven, since during the marriage ceremony, at the time of tying the Thirumangalyam on the neck of the bride, the priests who perform the marriage ceremony would chant divine mantras, and would call the divine gods and goddesses to bless the newly wedded couple. According to legend, during the Krita Yuga, when the great Bhakta Prahalada married with a pious and a noble girl Devi, both of them were blessed by Lord Narisimha, Lord Shiva and almost the entire gods, goddesses present during the marriage function of Prahalada, and wished them to live a long life.

But nowadays, even if the marriage ceremony is performed properly, and if the newly wedded girl wears the holy Thirumangalyam, in some cases, due to ego, the couples are getting separated within a few months of their marriage. At that time, nobody is thinking about the sanctity of the Thirumangalyam. Though in some cases, if the husband gives lot of troubles to the wife, it is very best to get separated from their lives. But getting divorce for solvable matters and for small, small things is not appreciable, since by doing so, in future both of them would have to suffer a lot, and in the society, their name would get spoiled.

Hence let us worship Lord Sundareswarar and Mata Meenakshi, in order to give a happy and a peaceful married life to all the married couples, and let us wish them to live together forever in their life.