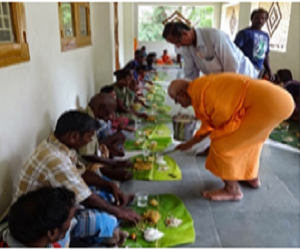 Annadana shelters are those places wherein free food would be offered to the people. It would be offered in most of the temples, and also in private Annadana choultries. Food is very essential to survive in our life, and without taking food, we cannot live our life. Hence those who provide food are considered as the forms of Mata Annapurani Devi, and they would be immensely blessed by her.

Apart from temples and private choultries, free food is also offered in some ashrams and institutions run by noble people, like Ramakrishna Mission and Ramanashram. In Shirdi and Mantralayam, daily free food is served to more than 1000 devotees with the spiritual blessings of the great saints Shirdi Sai Baba and Guru Raghavendra Swamigal. In most of the temples in India, free food is served to more than 100 devotees on a daily basis. Ancient kings used to open free food shelters and resting shelters in many places of their kingdom, in order to provide free food to the travellers, and also makes them to take rest for a few days in the guest houses. During the period of Rama and Krishna, their people didn’t suffer from hunger, since they have established sufficient free food shelters throughout their kingdom. Our Central and State governments are also providing provisions at an affordable price to the people, and in several states, canteens selling low priced food items are operating for the welfare of the poor people.

Some rich people can collectively form a trust and through that, they can do this noble food donation service. Nothing is equivalent to providing food to the hungry people, since Lord Krishna itself tells in his Bhagavat Gita, to provide food to the hungry people, in order to attain goodness in our life. Hence either let us start Annadana shelters on our own, or let us provide our support to the Annadana shelters, by giving them either in the form of provisions or in the form of money.

2020-11-17
Previous Post: Hanuman is a Shiva Avatar
Next Post: Tesco asked to apologize & compensate victims of exploitation in its India supply chain