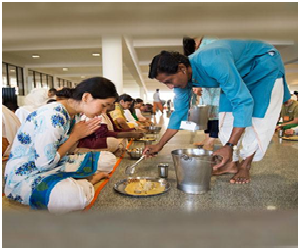 Hastodaka refers to offering the food as Neivedyam to Guru Raghavendra, and then it would be offered to the devotees. Whenever, if we have an opportunity to visit the holy Mantralayam Mutt, we must have to compulsorily consume the delicious food provided at the Mantralayam Temple. By taking the food, all of our health issues would be sorted out, and we would get great spiritual pleasure in that place.

This system of offering Hastodaka to the devotees was in practice since several years, and even during the time of famine in the year 1915, free food was served in Mantralayam Temple, to all the visiting devotees in a pleasing manner. Apart from Mantralayam Temple, free wholesome food is served in various branches of Raghavendra Mutts, to all the devotees, especially during Thursdays.

Guru Raghavendra before attaining sainthood, had suffered from severe poverty, and for most of the days, he and his family didn’t take proper food. Sometimes even if they have some food grains at their home, due to the non-availability of plantain leaves, he and his family used to have their food in the floor itself. Hence, after becoming the holy Madhwa Saint, he insisted his disciples and followers, to continue the tradition of providing food to all the devotees who visits the Mutt.

Guru Raghavendra’s first avatar was Bhakta Prahalada. The great Prahalada used to regularly serve food to more than thousand visitors at his palace. Prahalada’s next birth was Bahlika Raja. King Bahlika was a kind hearted and a generous king. He didn’t want to rule the big kingdom of Hastinapur, and hence he asked his brother Shantanu to rule the Hastinapur Kingdom. He ruled only the small Bahlika Kingdom. His nature is similar to that of Karna, and he used to donate gold and provided daily food to all the people in his kingdom by utilizing the wealth from his treasury.

In Mantralayam, an Anna Dana scheme called as Vishesha Hastodaka Nidhi is available. Just by paying a minimum amount of Rs.2500/-, we can enrol into the Permanent Annadana Endowment Scheme. Our Principal amount would be safely kept in Bank Fixed Deposits, and only the interest amount derived from the deposits would be used for providing daily annadanam to the devotees. Even while doing puja at our home, offering Hastodaka to our holy Guru Raghavendra, Sri Shirdi Sai Baba and Bhagavan Vishnu is considered as the best practice.