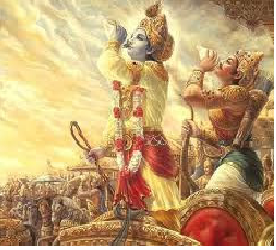 The Kurukshetra War is a war between the Pandavas and the Kauravas and it is mentioned in the holy epic Mahabharata. It is believed that at the present place of Haryana, the Kurukshetra war took place. This war was lasted for a period of 18 days, and after that, the Kauravas were killed in the battle, the Pandavas had won in the battle and began to rule the kingdom of Hastinapura. This war took place approximately before 5,300 years.

The place Kurukshetra is considered as a holy place, and due to this, the Holy Pandavas had won in the battle.  This battle was made between the Pandavas and the Kauravas due to the rivalry between them. Duryodana along with Karna and his brothers, took away all the belongings of the Pandavas, by winning them in the dice game, and send them to the forest for a period of 13 years. Even after the completion of the period, Duryodana was unwilling to give a share of kingdom to the Pandavas, and due to that, the Kurukshetra battle took place.

During this war, Lord Krishna had explained his teachings to Arjuna in the form of Bhagavat Gita, and still it acts as a guide to all of us. During the war, Bhishma was attacked by the Pandavas, and due to that, his body was fully injured, but still he gave noble teachings from the bed of arrows to the Pandavas.

In this Kurukshetra war, Lord Krishna served as a charioteer to Arjuna, and hence he was called with the name Parthasarthy. In his name, a temple is constructed during the 8th century AD at Triplicane, Chennai, and it is considered as one of the Divyadesams of Lord Vishnu. Still now lot of devotees even from foreign countries are visiting the holy shrine in order to get the glimpse of Lord Venkata Krishna, also known as Parthasarathy.

At the end of the war, Yudhishthira became the king of Hastinapur. After successfully ruling the kingdom for 36 years, he crowned Abhimanyu’s son, Parikshit, and he went to the Himalayas. Due to his good nature, from the Himalayas, he was welcomed by Lord Indra, and hence, he went to the abode of Lord Indra, the Swarka Loka. It is believed that he still lives in the Swarka Loka by enjoying all sorts of comforts in the heaven.

Everything is happening in this world, based on the will of the god. The Kurukshetra war took place, in order to destroy the evil forces and to protect the good ones. Lord Krishna wanted to reduce the burden of the divine earth mother, Bhudevi, and hence through this war, many bad people were killed, and by doing this, Lord Krishna made the holy earth mother to get happiness.