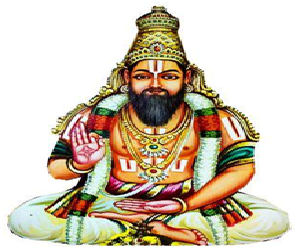 Sacrifice means sacrificing of anything in our life, like giving our food to others, giving all of our belongings for the purpose of construction of temples or to the poor people, donating our kidneys to our near or dears or to an unknown friend, or sacrificing all or our belongings to a thief, etc.

The great Lord Jesus Christ had sacrificed his life for the welfare of the mankind. Similarly the great Vaishnavite Saint and the disciple of Ramanuja, Sri Koorathazvar had lost both of his eyes when he tries to protect his guru from a Shaivite king. And even after that, he begged to the god to show mercy on the King who punished him. He is such a kind of divine saint, and at this present world, we cannot imagine such a kind of holy person, and he can be worshipped similar to the god. Shirdi Baba sacrificed his daily food, and most of the days, he used to give his entire food to animals like dogs, cats and squirrels. Guru Raghavendra Swamy had taught Vedic subjects to his students at free of cost, and hence he suffered from poverty. With his limited quantity of food, he used to give a major portion of his food to his students, and due to that, most of the days, he and his family used to drink only Thulasi Water. In order to become a Madhwa saint, he has to sacrifice himself, his wife and his only son, Lakshmi Narayana.

The great Purandara Dasa, an incarnation of Devarishi Narada, one day has left his entire belongings and cheerfully walked down in the streets along with his family with his Tambura, and this sudden change was happened due to the grace of Lord Vishnu.

But nowadays, most of the people are not interested to sacrifice anything in their life, and hence, they are suffering a lot in their daily life. People are becoming more and more selfish in their life, and they are very much interested to fill up only their belly, and they are not even enquiring about the well-being of their relatives, and if they consider their relatives are poor, useless and unhealthy, they would never turn back their heads, on their side. One thing people should remember each and every second of their life is that, our life is uncertain, and very short, and any time, Lord Yama Dharma, may knock down at our door, and would take away our lives.  We would get a good birth in our next birth only based on our good Karmic deeds of our present life.

Disrespecting the relatives and chasing away the helpless and poor people, would be noted down by the divine accountant, Lord Chitra Gupta and based on that, in our next birth we would have to suffer a lot. Ancient saints and sages have sacrificed the entire things in their life, and due to that, they have attained salvation. Hence, let us donate some portion of our wealth to some good charitable institutions, feed the poor and the hungry people, birds, animals and even to the insects like ants, and never ever commit sins in our life, worship the great almighty whole heartedly and be blessed.