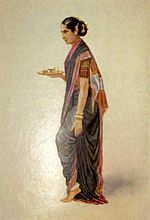 INTRODUCTION
Vedavati was the holy mother of the great Madhwacharya, whose birth name was Vasudeva, and her consort name was Naddantillaya. The couples were lived at a village in Karnataka. She was a noble woman and got great attachment on her son Vasudeva. The parents were performed Upanayana to Vasudeva at his younger age itself, and he had become a great saint at his teenage.
Sri Vasudeva was an avatar of Lord Vayu Deva and after he attained sainthood, his parents gave birth to another son Subhaktiman, who was known as Vishnu Tirtha at a later stage, and they also gave birth to a daughter. Sri Vishnu Tirtha also became a saint after his parent’s death.
Vedavati contains very good qualities, and used to tell bhakti stories to her son Vasudeva at his younger age. She used to take Vasudeva along with her to the temples, and worship the deities with full of bhakti in mind, and she also humbly invite the guests to her home, and offer wholesome food to them. Till her death, she showed great love and affection with her son Vasudeva, and after her death, she has attained the lotus feet of LORD VISHNU.
Let the praise the divine mother and be blessed.
“OM MATA VEDAVATI NAMAHA”
“OM SRI MADHWACHARYARE NAMAHA”
“JAI KRISHNA”
WRITTEN BY
R.HARISHANKAR