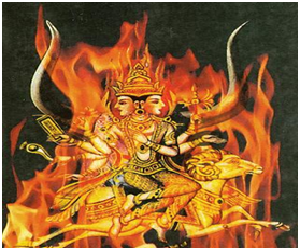 The Agni Purana, is an ancient Purana, it is written in Sanskrit by Sri Vyasa Bhagavan, and it is considered as a very sacred Purana. In this Purana, the greatness of Lord Agni Deva is mentioned, and his various teachings to the Maharishis, Bhagavathas and saints are also mentioned.

Agni describes about the four yugas, and among the four yugas, he considers Kali Yuga, as the very difficult yuga for the people. And he further tells that in this Kali Yuga, people would not follow the path of righteousness, and even the middle aged and old aged people would consider themselves as young people, and would commit lot of mistakes in their life.

Most of the youngsters would not give respect to their parents, and for most of the married couple, marriage life would not subsist for a long period of time. Community clashes, terrorism, accidents, suicides and murders would occur in all parts of the world, as a result of the actions of Kali Purusha.

In order to overcome from those problems, Lord Agni Deva advises us to inculcate great bhakti on Lord Vishnu, and to surrender at his holy feet.  Agni Bhagavan is one of the Vedic deities in Hinduism, and he is the god of fire. He is considered as a powerful god similar to Lord Surya, Chandra and Indra. He is the son of Kashyapa and Aditi.  Agni is worshipped by the Hindus, especially during the festivals like Deepavali and Karthigai Deepam.

Without the help of fire god, the entire world would not be able to function properly. Lord Agni discharges his duties in an excellent manner, and he is controlled by Lord Indra Bhagavan. He is giving the share of oblation to the respective Devas through the fire sacrifices. He is giving warmth to us during chill weather conditions, and he also heals the diseases of the people, prevents from fire accidents and from fire burns, if we sincerely pray him, and chants his mantra, “OM SRI AGNI BHAGAVANE NAMAHA”.