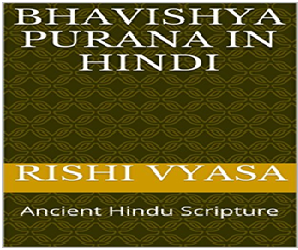 The Bhavisya Purana is one of the eighteen sacred puranas, which was written in Sanskrit  by the great sage Sri Veda Vyasa, who is also an AMSHA of Lord Vishnu. Worshipping Sri Vyasa Bhagavan is similar to worshipping Lord Vishnu, since both of them are considered as one and the same. Bhavishya Purana contains the details about the Kali Yuga, which is our present yuga, and describes about the sufferings of the humans in the earth, due to the influence of Kali Purusha.

He also tells the remedial measures to be taken in order to reduce the sufferings caused in this Kali Yuga. During this Yuga, people would commit lot of mistakes even without their knowledge, and due to that, they would suffer a lot. Children would treat their parents badly, and they would not even provide proper food to their parents, and most of the husbands would treat their wife and her relatives as the close relatives for him, and would spend lot of money only for their welfare and they would ignore their parents.

People would consider that lust alone would give great physical and mental relaxation for them, and due to that, they would even stop worshipping the deities. Instead of going to holy pilgrimages, people would eagerly spend their time in luxury hotels, parks and entertainment related places, and would eat a lot, and most of them would consume non-vegetarian food, without giving sufficient food to the poor and the needy.

Most of the people would only take care of their body, and they would forget to show attention on others. Marriages would last only for a few years, and most of the couple would get separated from each other. Rich people only would be given proper respect, and poor people would be ignored even by their relatives, and they would be disrespected by their relatives while meeting them during marriages, functions and ceremonies etc.

People would be given respect only based on their financial status, and even the close relatives of the poor people, would laugh at them, would criticize about their position, and would hurt them badly through words. Bad habits like lust, greed, anger and selfishness would prevail in the minds of most of the people in the world. Kali Purusha would forcefully make us to commit sins, and would give lot of troubles to us.

Vyasa Bhagavan suggests the people to worship Lord Vishnu whole heartedly in order to get rid from the evil effects of the Kali Purusha. This text is also considered as an extension of Bhagavatha Purana, and in this text, the greatness of Lord Vishnu, the kindness showered on his devotees and his forthcoming Kalki Avatar is also mentioned. After 426000+ odd years, Lord Kalki Bhagavan would incarnate in this earth, and he would destroy the evils and would safeguard the noble ones, and after his arrival, this present Kali Yuga would get completed and the new Satya Yuga would get started.

In Bhavishya Purana, the various names of Lord Vishnu is mentioned, and also it mentions about the sacred temples of various avatars of Vishnu, benefits in worshipping the temples of Vishnu, chanting the holy names of Vishnu, performance of puja and meditation and importance of doing homans and abhishekhams to the deities etc.