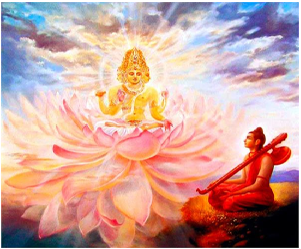 The Brahma Purana is one of the eighteen Puranas, and in this Purana, Lord Brahma is very much praised, and he is mentioned as a supreme god similar to Lord Vishnu and Shiva. Brahma Purana is an ancient purana and similar to other puranas, this purana also was written by the great sage Veda Vyasa. According to this Purana, Lord Brahma had created this universe before several millions of years ago.

Before the start of creation work, the entire universe was covered with full of darkness, and there was no one to live in that empty universe. At that time, a shining light was appeared in the centre of the universe, and Lord Vishnu and Lord Shiva had emerged from that light. And after a few years, as per the wishes of Lord Vishnu, Lord Brahma was born out from the navel of Lord Vishnu. Then as per the orders of Vishnu, he has started his creation work.

Brahma is the creator of the four Vedas, and his important divine sons are, Sanath Kumaras, Manu, Narada Maharishi, Daksha Bhagavan, Sangu Karna Devar and Marichi Maharishi, and they are also considered as the worshipful deities.

The details about the Vishnu devotees like Dhruva, Markandeya and Prahalada are also mentioned in this holy text. He is more popularly mentioned in the ancient Vedas and Puranas, and he is considered as the main Vedic deity.

During ancient times, Brahma was popularly worshipped similar to Shiva, Vishnu and Surya, but after the passage of time, his worship began to decline slowly, due to the increase in popularity of the other deities.

Among the few temples dedicated to Lord Brahma, Brahma Temple located at Pushkar, Rajasthan is considered as very famous temple, and every year during the festival days, people would gather in large numbers to worship the creator god and our divine father, Lord Brahma. By worshipping Lord Brahma, childless couple would be blessed with noble children, and he is having the capability to slightly change our fate also, since he is the one who is putting the fate on our heads.

The Brahma Purana describes that the entire universe is covered with full of illusion, and in order to come out from that illusion, Brahma asks us to develop bhakti on god, and to generate good habits in our life. In this purana, the greatness of Lord Surya, the sun god is also mentioned. Surya is considered as a Vedic deity, and he is the one who gives light to the entire universe, and removes the darkness, and would lit the divine light in our lives.

By reading this ancient Purana, we would get the grace of Brahma’s consort Mata Saraswati also, and due to that, we would get good knowledge, wisdom, courage and mental stability. Lord Brahma is the giver of boons and the fulfiller of our wishes, and he is the one, who has granted boons to the divine devas as well as to the demons. We can be worship him by placing his picture in our Puja room, and can chant his mantra, “OM SRI PARAMA PURUSHAYA BRAHMA DEVAYA NAMAHA”, in order to get all kinds of prosperities in our life.