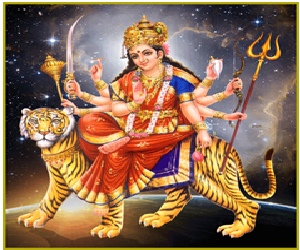 The Devi Mahatmya is a Hindu Holy text which describes Mata Durga Devi, also called as Shakti Devi and Parvati Devi, as the supreme deity and the controller of the universe.  It is an ancient                    text written in Sanskrit, and it is written by the great sage Sri V edavyasa. Devi Mahatmyam is also known as the Durga Mahima, and the text contains the greatness of Devi Durga and it is considered as one of the most famous texts of Hinduism.

The Devi Mahatmya describes the battle between Durga Mata with the demon Mahishasura, and about her victory in the battle. It is also mentioned in the text, that Durga Devi manifests as Lakshmi, and gives good name, fame and wealth to the devotees, and she also manifests as Mata Saraswati, and gives wisdom, courage and good knowledge in all the subjects to her devotees. According to Devi Mahatmya, from the powers of Mata Durga, all other divine deities are created, and according to her instructions, they are properly discharging their duties. The Devi Mahatmya is considered equivalent to Srimad Bhagavatham and the Bhagavad Gita.  The Devi Mahatmya has been very much popular in North and East India, and this Devi Purana is recited during the Navratri festival days by the devotees in the Durga temples throughout India.

The details about the great epic Devi Mahatmya is also mentioned in Mahabharata. In Devi Mahatmya, Durga Devi is also called as Chandika and Mahakali, and this text has been translated into most of the Indian languages, and this text is considered as very holy by the Shakti devotees, and they used to read this holy text regularly.

According to the opinion of famous sages, by reading Devi Mahatmya, we would get good karma, and it is considered similar to the holy Vedas, and reading Devi Mahatmya is similar to doing ritual yagnas, performing puja and abhishekham to Devi Durga. By reading this sacred text, our mind would become pure, we would get great mental satisfaction, and we would be free from tensions and worries. The greatness of Durga Devi cannot be described fully even by her consort Lord Shiva, since she is the universal mother, and always shows kindness and affection on all the living beings in the entire universe. Various private TV Channels have telecasted the importance of Mata Durga, based on Devi Mahatmya.

There are lot of Durga temples scattered all over the world. By visiting the holy Durga temples, we would get the divine grace of the holy mother, and due to that, we would be able to run our life without much sufferings in our life. Kanaka Durga Temple at Vijayawada is one of the famous temples of Ma Durga, and in that temple, free food is served on a daily basis to hundreds of devotees. By regularly chanting the Durga Slokas and her names, we would prosper in our life.