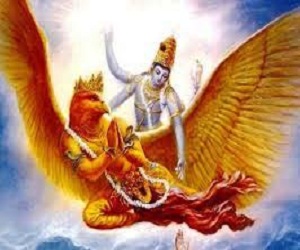 Garuda Purana is one of the Puranas, and it is known as Garuda Purana, since this purana is based on the dialogue between Lord Garuda and Lord Vishnu about human life. It was narrated by Garuda to Rishi Kashyapa, and it was written in a good manner by Sage Vedavyasa during the previous Dwapara Yuga.

Garuda Purana tells us about the holy avatars of Lord Vishnu, the creation and the functioning of the Universe, greatness of Lord Vishnu, and about the journey of a soul after death. Garuda Purana also mentions about the significance of the Holy bird Garuda, his abnormal powers, and his mercy towards his devotees etc. This purana mentions the different types of austerities, details of worship, chanting of holy Mantras and the ways to remove our sins, showing our bhakti on Lord Vishnu etc.

By reading Garuda Purana, we can know about our life after death, and we would have an opportunity to correct ourselves by doing good deeds in our life. Garuda Purana describes the Yama-Loka and the activities of Lord Yama. It tells how the soul takes innumerable births after death, and based on our karmic deeds, we would get salvation or otherwise we would suffer in the hell. In this Purana, the punishments given by Lord Yama for the sins committed by us during our life time is mentioned. It gives a detailed explanation                     about the ceremonies to be performed after our death, and mentions about the various types of hells situated in the Yama Loka.

One who reads or listens to the divine discourse of Garuda Purana would get great happiness and peacefulness in their mind, and their                       ancestors would attain a suitable divine world. It is must for each and every Hindu, to keep a Garuda Purana book in their homes, since this text is considered as very sacred. In this Purana, Lord Vishnu is mentioned as the supreme deity, and we must have to seek his help and must surrender ourselves at his holy feet, in order to avoid stringent punishments in the Yama Loka.

While making conversation with Garuda, Lord Vishnu says: those who are showing their sincere devotion on me and with my bhaktas like Dhruva, Narada and Prahalada need not worry about their life after death, and after their death, they would reach the divine world as per their wish.