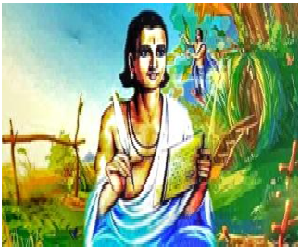 Kumarasambhavam is a marvellous poem written by Kalidasa during the 5th century. It is considered as one of the master piece works of Kalidasa, and it was written in Sanskrit language. In this poem, he described about the birth of Lord Kumara, the son of Shiva and Parvati, who is also known Muruga, Shanmuga, Skanda and by various other names. This text also speaks about the beauty of Lord Kumara, and his significance.

Once there lived a powerful demon whose name is Tarakasura, and after getting lot of boons from Lord Shiva, he began to create lot of troubles to the people in the earth and also in the heaven. Due to that, Lord Kartikeya was born from the third eye spark of Lord Shiva, killed the demon Taraka, and restored the kingdom of Heaven, and made Lord Indra and other Devas to peacefully live in the heaven. It is also believed that whenever Kalidas gets any doubt over the Puranic incidents, Lord Kumara would clarify his doubt in his dream. After Kalidas had completed this great epic, Lord Kumara had given his divine vision and blessed him. This poem was praised by the kings, scholars and also by the general public, since it contains the detailed Puranic incidents of Lord Muruga. Kalidasa is considered as an incarnation of Lord Brahma, and hence he received the divine grace of Ma Saraswati at his teenage. He became a great scholar, and earned good name and fame out of his wonderful talent in penning bhakti poems on the deities. It is considered as a great Bhakti text of Lord Muruga, next to Sri Kachiappa Sivachariar’s Skanda Purana.

At this present day life, we should develop reading habit regularly, and we should read lot of spiritual books in order to gain good spiritual knowledge. Reading spiritual books would boost our spiritual energy, and would give great confidence and withstanding powers in our life, and we can also pass on our days peacefully without any hindrances in our life.