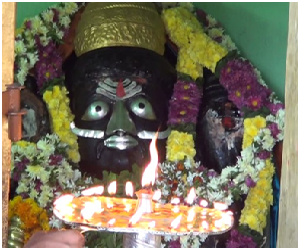 Narayaniyam is a holy Sanskrit text, which consists of beautiful poems from the Bhagavata Purana. It was written by Narayana Bhattathiri, during 16th century AD, who was one of the famous poets in Kerala. The Bhagavata Purana is a sacred text, and it tells us about the significance of Lord Krishna, his wonderful Leelas, miracles performed by him and about his childhood plays etc.

The divine text, Narayaniyam is still read by lot of Hindus, especially by the Malayalee Hindus, and they consider it as the Mahaprasad of Lord Krishna. This text would be recited by large number of devotees in the Guruvayur Krishna Temple, and also in the Vishnu temples during the times of festivals. Narayaniyam contains about the complete details of Lord Narayana, and this beautiful work was completed by Bhattathiri at the Guruvayur Temple, Kerala, through the blessings of Lord Krishna. Narayaniyam tells us about the avatars of Lord Vishnu, the grace showered on his devotees, and about his supreme powers.

The “chanting” of Narayaniyam is believed to heal various mental and physical diseases, and also it would remove all sorts of doshams of the devotees. Discourses on Narayaniyam would regularly take place in the Guruvayur temple, and large number of devotees would eagerly watch the divine discourse, and would get delighted. Narayana Bhattathiri was born in the year 1560 in a village in Malappuram district, Kerala.  He has written Narayaniyam due to the grace of Lord Krishna, and after writing the holy text, Narayaniyam, his Paralysis disease was cured, due to the blessings of Krishna.

The people of Kerala worship Krishna as Guruvayurappan in the temple of Guruvayur. Ancient Kerala kings used to regularly recite Narayaniyam, and due to that, they ruled their kingdom in a well versed manner, and they lived their life peacefully and happily. Narayaneeya Sahasranama, is also a holy text which contains 1,000 names of Lord Vishnu, and it was written by an Ayurveda Physician, Sri Ayyappan Kariyat.

Let us praise Lord Krishna for his greatness, kindness and holiness and be blessed.